Ventilation air methane (VAM) refers to the ventilating exhaust from coal mines with methane concentrations lower than 0.75%. Although the concentration is extremely low, the volume of VAM flow is extremely large. In most cases, these emissions are emitted directly to the atmosphere, thus the total quantity of methane released is significant. This will damage the ozone layer in the atmosphere and as a result, contribute to climate change. 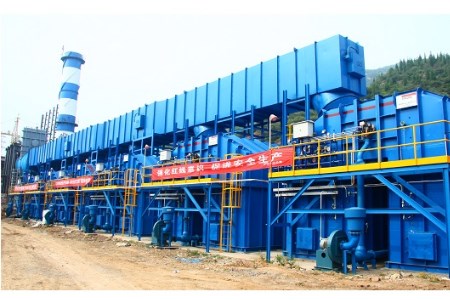 With the rapid development in China, the government is giving more attention to environmental protection issues and the corresponding regulation is becoming increasingly restrictive. Almost every coal mining enterprise in China must quickly determine how to meet the regulatory standards and at the same time, efficiently utilise the huge amount of VAM.

A large coal mining company in Shanxi Province (China) decided to adopt a new technology to capture the VAM and convert it into electricity. After careful evaluation of the suppliers, Anguil’s team in Shanghai was selected to provide the VAM air pollution control system. Anguil Environmental is headquartered in the US with more than 1900 pollution abatement installations around the world. Having a presence in Asia for over two decades, the company has successfully installed hundreds of its pollution abatement systems in China.

After a comprehensive design review, Anguil recommended the regenerative thermal oxidizer (RTO) technology equipped with hot gas bypass to destroy the VAM emissions. In Anguil’s design, the excess heat produced during the oxidation process would be routed from a hot gas bypass damper to the boiler to generate enough steam, which is led to the steam turbine for electricity generation. Different from traditional methods of power generation by burning the coal or gas, using the excess heat from the RTO does not result in the presence of nitrogen oxide and can keep the hot air stream at a very stable temperature, which is very important for the following power generation. This way, the RTO system is not a just destruction technology; it can also help to recover the thermal energy for heating and electricity generation. The VAM is converted from a greenhouse gas to a revenue generating initiative for the coal mining enterprise as they are able to sell the electricity.

This VAM abatement project consists of six RTOs that process a total exhaust volume of 540 000 NM3/hr with a methane concentration of 1.2%. Once at full capacity, the system will generate electric power with an installed capacity of 15 MW, which will be returned to the national power grid. The VAM destruction efficiency is above 95% and the system is capable of destroying 51 million ft3 of methane annually.

Under the close co-operation between the different departments and the full support from Anguil headquarters in the US, the RTOs were installed with on time and within budget. The mining customer recognised Anguil with a Best Engineering Organization Unit Award.

As a new method to utilise a very low concentration of VAM in high efficiency, this project has received extensive attention locally. As reported by several local news outlets, the initiative has been listed as a Methane Zero Net Emission Demonstration Project by China National Development and Reform Commission.

With the success of this system, Anguil received more requests from other mining companies to help with their VAM utilisation problem and more Anguil systems will be installed on similar applications very soon.

Read the article online at: https://www.worldcoal.com/power/14082019/anguil-supplies-vam-air-pollution-control-system-for-coal-project-in-china/