China will boost efforts this year to rid itself of a strong addiction to coal in a bid to reduce damaging pollution as well as cut the energy intensity of its economy, which is expected to grow at its lowest rate in 25 years.

The National Development and Reform Commission (NDRC) said in its annual report on Thursday that it would implement policies aimed at reducing coal consumption and controlling the number of energy-intensive projects in polluted regions.

China is trying to strike a balance between improving its environment and restructuring away from an economy dominated by energy intensive industries like steel making and construction towards one focused more on consumption and the service sector.

China's Premier Li Keqiang said the government planned to cut the country's energy intensity, the amount of energy used per unit of GDP growth, by 3.1% in 2015, compared with a 4.8% fall in 2014.

Li said the world's second-largest economy would target growth this year of around 7%, signalling the lowest expansion for a quarter of a century.

"This mark-down in growth and three quick monetary stimulus programmes across the last four months reflects the state of slowdown China is in," said Howie Lee, analyst at Singapore-based brokerage Phillip Futures.

Premier Li made fighting pollution a priority. "We will strive for zero-growth in the consumption of coal in key areas of the country," he said to parliament.

"Environmental pollution is a blight on people's quality of life and a trouble that weighs on their hearts," Li said.

"For areas affected by severe smog, regions where conserving energy is difficult, and industries with overcapacity, we will strictly control the number of energy-intensive projects and implement policies for reducing coal use, and for replacing coal with alternative energy sources," the report said.

China's top energy official, Nur Bekri, said in comments published by the National Energy Administration that improving efficiency and environmental standards for coal would be a key component of China's energy policy this year.

China plans to cap coal use to below 65% of total primary energy consumption by 2017 and move towards 50% by the middle of the century. The government wants natural gas and renewables to take up most of share lost by coal.

Price impact
As the world's biggest consumer of energy and raw materials, China's slowing growth and restructuring is having a big impact on commodities markets.

Brent crude oil prices have fallen by around 50% since June 2014 as rising global production clashes with slowing economies, especially in Asia, as well as improving energy efficiency.

Iron ore prices, used for steel making, are hovering close to levels last seen during the financial crisis in 2008/2009, and thermal coal, the main power generation fuel, is close to 10-year lows.

Almost 70% of China's total energy needs currently come from coal, compared with developed economies like the United States, Japan or Germany, where oil is the biggest energy source. In China, oil contributes less than 20%.

Both are seen as dirty compared with gas, the third most used fossil fuel, or alternative fuels such as nuclear power or renewables.

China and Australia conclude negotiations on a bilateral free trade agreement but questions are raised over its benefits to the coal sector. 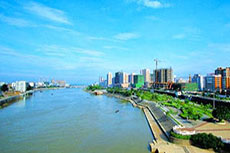 A recent research note from the EIA shows that China consumers almost as much coal as the rest of the world combined.