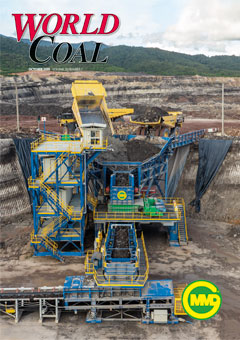 Wyoming is the largest coal producing region in the US. In 2017, the state’s mining operations extracted over 316 million t of coal. It is also home to the Powder River Basin, of which 16 mines included within basin produce 43% of the US’ coal, according to the EIA. But regardless of these facts, the coal industry is caught between a rock and a hard place, and has been for some time.

On 1 July, Wyoming’s Eagle Butte and Belle Ayr coal mines shut down as its operator, Blackjewel LLC, filed for Chapter 11 bankruptcy. The EIA revealed that these mines were the fourth and sixth greatest producing US coal mines in 2017.

Back in August, Contura Energy made a successful bid for the mines at an auction, though the sale is still waiting for federal approval. The government is concerned about unpaid mineral royalties, and has therefore not yet approved Contura’s purchase.

Since then, Contura has received interest from Eagle Specialty Materials (ESM) for the potential purchase of the mines. Under the agreement, Contura will pay ESM US$90 million to acquire the mines, whilst ESM will make a specified cash payment to Blackjewel and assume certain related liabilities, including the reclamation obligations related to the mines.1 The company will also pay off Blackjewel’s other bankruptcy debts, such as owed mineral royalties, taxes and abandoned mine land fees. The agreement is subject to approval by both Contura’s board of directors and the US Bankruptcy Court, but if agreed, the mines will resume operations.

Contura CEO David Stetson stated: “We’ve been clear that operating long-term in the PRB was not in Contura’s strategic plans, and that the best possible outcome for all interested parties would be for another responsible operator to step up that was interested in doing just that. We are extremely pleased that this deal outlines a path to relieve Contura from any go-forward liabilities related to these assets, while also providing long-term employment opportunities for hard-working miners and ongoing revenue to local, state, and federal governments.”

It is evident that America’s electric power industry is changing, and Blackjewel is just one example of this. Throughout the last decade and in the midst of an environmental revolution, over half of the country’s coal-fired power plants have shut down or are intending to.

In addition to the environmental concerns, the coal-fired power industry has been losing ground to natural gas over the last 10 years as it is cheaper than coal. Similarly, the low cost of both solar and wind power has cut further into coal’s market.

But there’s still hope for miners, especially in Wyoming. As I write, there’s a project in the pipeline that is looking at ways to capture coal-produced CO2, which experts believe could be an effective way to fight climate change. If successful, it could really help the coal industry.

The project, known as the Integrated Test Centre (ITC), is being carried out at Basin Electric Power Cooperative’s Dry Fork power plant just outside Gillette (Wyoming). The ITC explains that, whilst still in development, the “technology positioned inside the plants’ exhaust flue allows researchers to divert flue gas to their testing facility when and as needed, where CO2 molecules can be pulled and utilised.”

But that’s not all. The US Department of Energy has awarded US$56.5 million in federal funding to numerous research and development (R&D) projects to advance coal technologies and study. These projects further the US Department of Energy’s commitment to strengthening clean coal technologies. Some topics that will be investigated include carbon capture, utilisation and storage; rare earth element recovery; coal to products; crosscutting coal R&D; steam turbine efficiency; and advanced materials.2

As Jason Begger, Executive Director of the Wyoming Infrastructure Authority, said: “If we can develop carbon capture types of technology that remove that from the atmosphere, then, hopefully, coal and oil and gas can be used long into the future.”

The effects of climate change are widespread, so it’s good to see the coal industry is stepping up and acting on it.