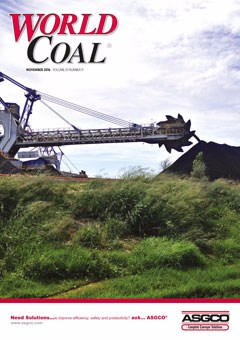 The news was improved as a number of US coal companies returned to the export market, taking advantage of the rise in coal prices that has been a feature of global markets this year. Cloud Peak Energy, for example, announced that it had sold 1 million short t of its Powder River Basin coal to customers in Asia for delivery between November 2016 and February 2017. Alliance Resource Partners’ President and CEO, Joseph Craft III, announced that his company was participating in the coal price rally by “opportunistically contracting for the export of 3 million short t to be shipped over the next six months”. Craft was also relatively bullish on his 2017 outlook, arguing that the recovery in US thermal coal markets would continue, “as higher natural gas prices spur increased demand for coal and supply is reduced by increased shipments of US coal into the export markets.”

This of course presupposes continued strength in global coal markets: something US coal producers have bet on before – to their cost.

As with most things in the coal industry, it comes down to China. Earlier in the year, Beijing introduced production limits to try to boost prices to support its (generally loss-making) coal miners. The policy was successful – indeed perhaps too successful as Chinese domestic price increases prompted Chinese buyers to turn again, and significantly, to the seaborne market.

Chinese seaborne coal imports were 20.03 million t in October, according to vessel tracking and port data from Reuters Supply Chain and Commodity Forecasts. That is the highest monthly total since Thomson Reuters began assessing the data in January 2015 and is representative of a trend seen throughout this year – a trend that provided the base for the remarkable performance of metallurgical and thermal coal prices this year.

Now concerned at the genie it has unleashed, the Chinese government appears to be trying to put it back in the bottle, easing production restrictions and (according to Reuters) asking its biggest coal mining companies to cap sales prices in their 2017 supply contracts to at or below current spot prices.

Not that this should come as a surprise: Beijing’s policymaking is notoriously capricious and reactionary – particularly so when it comes to coal.

The upshot of all of this is that the current rally in coal prices could also prove a fickle beast. Making hay while the sun shines is all well and good – welcome even, given the previous months of pain. But the industry should not unlearn the lessons of the downturn too quickly: the rain may be back soon.