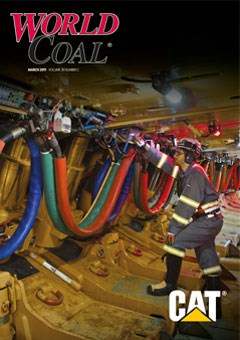 With one of the largest reserves in Asia, India has long been a hub for coal production. Following its independence in 1947, a greater need for the fossil fuel was felt in the country’s First Five Year Plan. And now, over 70 years on and as the second most populous country in the world, India has an even greater demand for power.

Coal India has been working hard to hit its fiscal production target, as per its Memorandum of Understanding (MoU) with India’s Ministry of Coal – the company intends to reach 610 million t for both production and offtake for FY19.

The mining company managed to supply 440.8 million t of coal for power generation between April 2018 and February 2019, thanks to an output stabilisation at its Mahanadi Coalfields Ltd. and South Eastern Coalfields Ltd. subsidiaries. This is a 7.1% increase over the previous financial year. Subsequently, this caused a number of fuel-starved power plants to get ‘back in business’. And it was needed.

Flashback to October 2018: despite Coal India increasing its production to 306.24 million t (between April - October), the country was obligated to import 133.13 million t of coal in order to meet additional demand. And, by the end of December, nine power plants were facing critical shortages following low seasonal demand.

A Coal India official explained that “in India, the biggest problem is a lack of contiguous coal seams. In many places, coal occurrences are in patches, which may not be commercially viable to mine at this stage.” However, in February this year, the company was able to reopen a number of mines that had previously been closed due to safety and/or viability concerns. This will not only increase the production of higher-grade coal, but also aid local employment growth.

Gopal Singh, Chairman and Managing Director at Central Coalfields, stated: “Reopening mines will generate employment for locals and produce more coal, which will help in furthering the country’s effort towards providing affordable electricity for all and generating employment.”

And at the end of February, Coal India achieved 99% and 99.5% of its MoU production and offtake targets, respectively. The company’s coal despatches were up 3% y/y, improving from the relatively flat volumes we’ve been seeing since December 2018.

Morgan Stanley has since awarded the company an ‘overweight’ rating, with a target price of Rs 268 per share (as issued at the time of writing). According to the investment bank, February’s 7% production growth signifies acceleration.

But it’s not just Coal India that has been helping to curb the country’s power deficit. In February, Bharat Heavy Electricals Limited (BHEL) commissioned another 250 MW coal-fired power plant for the Nabinagar thermal power project in Bihar; India’s third most populated state. The project is part of a joint venture between electricity firm NTPC and Indian Railways. 90% of the power produced will be allocated to the railways; 10% will be provided to Bihar.

Similarly, on 7 March, the Union Council of Ministers of India approved recommendations made by a group of ministers concerning stressed coal-fired power projects. According to Finance Minister Arun Jaitley, the plan looks to revive a number of India’s stressed thermal power plants, as well as commission new coal-fired facilities.

“Power projects of 1320 MW capacity would be set up in the eastern state of Bihar and the northern part of Uttar Pradesh,” Jaitley said.

He went on to explain that the approved recommendations also include the granting of coal linkages for short-term power purchase agreements.

Adani, GVK, GMR, Jaypee and Essar are just a few companies with stressed power projects that could benefit from the cabinet’s decision.

For more information on India’s current coal market, check out this issue’s regional report on p. 10, which provides insight from IHS Markit on this topic. We also feature a collaborative article from Eickhoff and Gainwell on new room and pillar equipment, which is helping to support the country’s coal growth (p. 40). I hope you enjoy the issue!