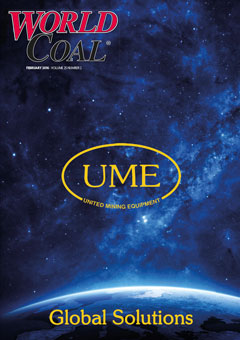 The coal industry is not short of doom and gloom – and that was no different this month, as our Coal News pages continue to testify. But as I said last month, look hard and there are some patches of light to be found.

Take China. It is not news that China’s coal industry is in woeful shape. According to BMI Research, 80% of its coal industry was thought to be loss-making in 2015. Longmay Group, the biggest coal mining company in northwest China, announced 100 000 layoffs in four cities last September in what was perhaps the most public admission of the industry’s troubles. Overall, BMI Research reckons China’s coal industry has shed some 870 000 jobs – equal to all of the new jobs the industry created in the boom since 2007 – as coal companies struggle to come to terms with lower demand from utilities.

Nor has China kept its woes to itself. Coal imports have plummeted as the government placed quality restrictions on coal coming into the country and Chinese coal producers battled to price imports out of the Chinese coal mix. Meanwhile, a glut of cheap Chinese steel has flooded the international market, hitting steel producers elsewhere – as the UK steel industry, among others, has found out to its cost. The availability of this cheap Chinese steel has displaced metallurgical coal import demand in some major steelmaking regions.

But these trends could be changing. This month saw the Chinese government announce that it would support the closure of 4300 small and inefficient coal mines in a bid to reduce the country’s production capacity by 700 million t. Importantly (and marking this out from similar previous announcements) was the promise of cash to cushion the impact of the mine closures – Yuan 30 billion (US$4.56 billion) of it.

The decision to up the ante on mine closures follows a decision last month to halt approval of new coal mines until at least 2019. China’s coal oversupply is not going to disappear overnight. But these measures at least show that the government may be taking the problem seriously and could put a bottom under the slide in Chinese coal imports.

Meanwhile, in the steel sector, export prices for Chinese steel fell below steel mills’ variable costs in October, according to CRU’s steel cost analysis. Add to this the growing number of regions that have put measures in place to protect domestic steel industries from cheap Chinese imports, limiting the destination options for Chinese exporters, and CRU forecasts a 20% fall in Chinese steel exports in 2016, benefitting metallurgical coal demand elsewhere in the world.

Neither of these trends will make 2016 a good year for the coal industry. But they are two of a few signs emerging that could point to an approaching market bottom. As I said last month, it is easy to be blinded by the doom and gloom. Coal is – and will remain for some time yet – a vital part of the global economy: perhaps then it is time to start looking for the light.