Assocarboni, the Italian Coal Industry Association, have stated that global coal production grew by 3% to 7.2 billion t in 2014, in comparison with world seaborne trade that increased by 5% reaching 1.2 billion t.

In the last decade, about half of the increase in global energy demand has been satisfied by coal, while in the last hundred years, the amount of energy produced by this source has been equal to the total of that produced by nuclear power, renewable sources, oil and natural gas together.

On the other hand, Italy’s final figures for 2014 confirmed a sharp decline: steam coal imports decreased by 11% year on year to 16 million t, and coking coal and PCI imports reached 4 million t, a fall of 15% compared to last year. The main reasons for this drop are the closure of the Vado Ligure coal plant and the enduring troubles of the ILVA steel plants in Taranto, adding to the persistent economic weakness in the country.

In line with the other European countries, Italy’s natural gas imports decreased by 11% in 2014. Nevertheless, Italy still depends on natural gas and renewables to meet over 70% of its energy needs, and this not only affects the country’s energy independence and security of supply but also has a negative impact on the price of electricity.

“It is urgent for Italy to rethink its policy on coal. A coal plant was shut down last year with serious consequences of industrial policy. Italy needs more coal plants like the existing ones, which boast an average efficiency of 39%, with peaks of 46% in the case of the Torrevaldaliga North, compared to the European average of 35%”, this is the message put forward to the Italian Government by Andrea Clavarino, Chairman of Assocarboni, during the 2015 Assocarboni National Congress, held in Rome.

“The prospects for recovery of the Italian economy are threatened by the country’s industrial and energy policies, which highly favour the natural gas industry: the case of the Tirreno Power coal plant of Vado Ligure is emblematic. Since the plant was stopped in March 2014, the investigations carried out by Arpal have shown no improvement in the quality of the air nor a reduction in fine dust and SO2 levels in the area. As a matter of fact, a year later they are still the same”, commented Clavarino.

According to the International Prevention Research Institute – the iPRI of Lyon, until now there has been no evidence of an increase or a reduction in the risk of mortality or of other adverse effects on the health of those working in coal-fired power stations, or who live nearby, that can be directly linked to pollution emitted by the plants.

However, some encouraging steps have been taken in Italy too. The country has committed to a program of industrial innovation aimed at the development and engineering of oxy-fuel combustion technology for CO2 capture and geological storage. The project has been developed by the "Sotacarbo - Technology Hub for Clean Energy" in Sulcis (Sardinia), with the aim of enhancing the competitiveness of domestic industry in the international market in the coming decades, with a particular focus on China and other major coal consuming countries.

Progress in technology and new practices of environmentalisation of coal plants have made this energy source a cost-effective alternative in Italy, far more beneficial than natural gas. Today, the 12 coal plants in the country boast an average efficiency of 40%, with a peak of 46% in Torrevaldaliga Nord, which is only reached in Japan and Denmark globally.

The XXI UN Framework Convention on Climate Change (UNFCCC), to be held in Paris at the end of this year, will see Assocarboni taking an active part to the negotiations in order to ensure that the best available clean coal technologies, such as HELE (High-Efficiency, Low Emissions technologies) and CCS, are adequately considered.

“We call on the Government to rebalance the national energy mix, bringing it more in line with the European levels, thus objectively assessing the affordability of coal as a key factor. Less natural gas, which is expensive and carries obvious implications in terms of security of supply, and more coal and renewables: this is our simple proposal for Italy, based also on the experience of other countries, such as the UK, Germany, Spain and Turkey, which have recently increased the proportion of coal in their energy mix”, Andrea Clavarino concluded.

In 2014, coal confirmed its position as the first global source of electricity generation, accounting for 42% of overall production, (followed by nuclear power and natural gas, with a quota of 20% and 17% respectively). In Italy, figures are very different and coal accounts for only 13% of the national energy mix.

According to the latest figures of Assocarboni, Indonesia remained the world’s leading coal exporter in 2014, reaching 338 million t. The largest share of its exports were destined for China, followed by India and South Korea.

Furthermore, Japan has launched the construction of 7 new coal plants, in order to cope with the nuclear exit. As a matter of fact, the latest generation coal plants are cheaper and more efficient than those fuelled by oil and natural gas already present in the country.

Italy’s imports of both thermal and metallurgical coal dropped this year, leaving the country further dependent on imported natural gas. 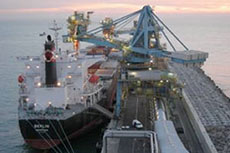 Tenova Takfraf secures order from an Italian steel producer for the supply of a bucket-chain continuous ship unloader.

Italy’s coal imports will rise by 12% this year to 19 million t, but its current market share remains the lowest in Europe, hitting the competitiveness of Italian industry, says industry association.

Currently reliant on imported gas, Italy is keen to develop its clean coal industry with a pioneering CCS demonstration plant at Porto Tolle and the construction of several high-efficiency coal-fired power plants.