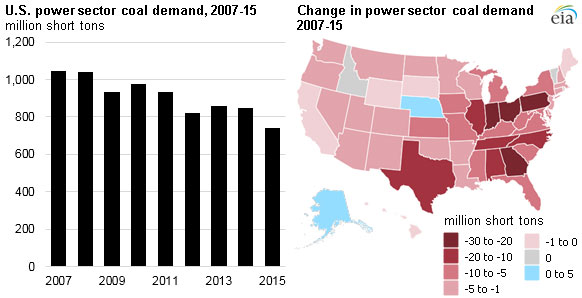 In the US, 97% of all steam coal is used to generate electricity. The price and availability of fuels other than coal have had a major effect on coal consumption since 2007. Increased supply of natural gas and a resulting natural gas price decline spurred increases in natural gas-fired power generation in several states, generally at the expense of coal-fired generation. Electricity generation from wind and solar sources also increased significantly over this period, driven by a combination of federal tax credits, state-level mandates, and technology improvements.

Coal use in the electric power sector decreased in Ohio, Pennsylvania, and Indiana by 49%, 43%, and 38%, respectively, between 2007 and 2015. In Ohio and Pennsylvania, increased production of natural gas from the nearby Utica and Marcellus shale plays resulted in more and relatively less expensive natural gas being available to power plants in these states. Indiana's legislature created a voluntary energy portfolio standard, which took effect in 2012, encouraging electric utilities and retail power generators to generate more electricity from renewable fuels and nuclear, as well as from any natural gas generators that displace existing coal-fired generation. Combined natural gas consumption at electric power plants in Ohio, Pennsylvania, and Indiana increased from 219 billion ft3 in 2007 to 777 billion ft3 in 2015. Coal consumption from these three states fell from 176 million short t to 100 million short t over the same period. 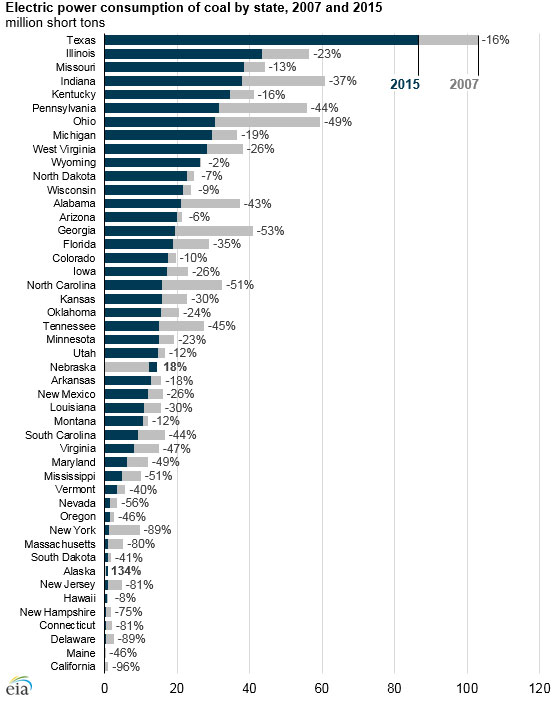 The decline in power sector coal consumption across these six states was often accompanied by shifts in coal supply sources. In general, imports and receipts of coal from distant sources decreased the most. Indiana and Ohio received much less coal from the Powder River Basin in Wyoming and Montana in 2015 than in 2007. In both Georgia and North Carolina, the largest decline in coal receipts came from Central Appalachian coal, which was partially offset by higher receipts of Illinois Basin coal.

Edited from source by Angharad Lock

Read the article online at: https://www.worldcoal.com/coal/28042016/eia-power-sector-coal-demand-has-fallen-687/