Documented in the AEO2016 Reference case, the natural gas-fired share of generation declines temporarily after 2016, then resumes rising in about 2020 and once again exceeds the coal-fired share in 2022 and throughout the rest of the AEO2016 projection to 2040.

EIA's analysis of the US electricity market is divided into 22 regions, which in this discussion are further reduced to 9 regions above. The current generation mix across these regions varies. 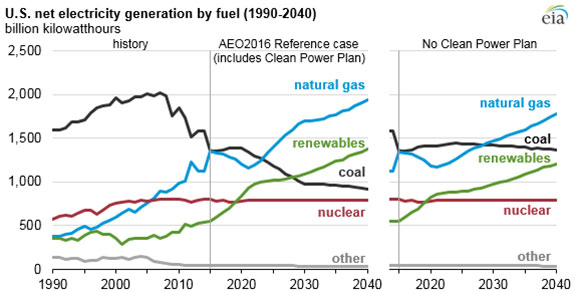 Certain regions that are home to US coal production, the Midwest/Mid-Atlantic, Southwest/Rockies, and Northern Plains, tend to have greater reliance on coal-fired electricity generation. These regions have among the highest CO2 reduction requirements and consequently are expected to have the largest shifts in their generation mix. 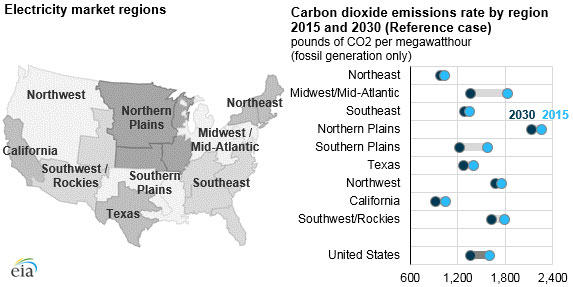 In the Midwest/Mid-Atlantic region, a large decline in coal generation is offset by an increase in natural gas generation, which is expected to result in a 26% decline in the region's emission rate.

The Southwest/Rockies region is projected to see an expansion of renewables generation that is nearly twice as large as the decline in coal generation. Other regions, such as Texas, the Southern Plains, and the Southeast, rely more on natural gas-fired generation. 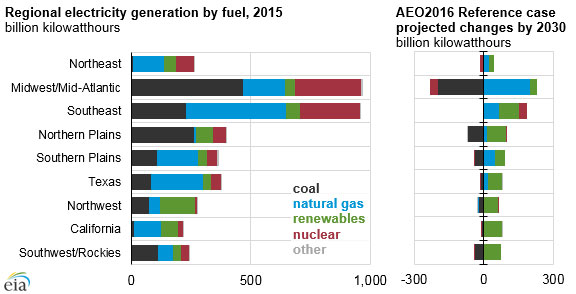