Total sourced production stood at 71.2 million t – 5% higher than H1 2013. The company said the increase was made possible by a rise in production at its Australian thermal coal operations, while the company’s share in Colombian coal operator, Cerrejon, saw a 31% rise in coal production.

Australian thermal and semi soft coal production increased to 30.5 million t – 8% higher than H1 2013. The increase was attributed by the company to production ramp up at Ravensworth North and Rolleston, as well as productivity gains at Ulan underground and Bulga, as well as commencement of longwall operations at Ulan West.

Glencore’s share of Cerrejon production was 5.9 million t. The company said the 1.4 million t increase from last year was largely attributable to the impact of a 32 day strike that occurred in Colombia during Q1 2013.

Also in Colombia, Glencore’s Prodeco reported and increase in coal production to 10.2 million t. This 6% increase on H1 2013 came from productivity increases and continued activity in the company’s expansion project.

Glencore’s production rates could have been higher, if it weren’t for a significant reduction in metallurgical coal production. The company said that Australian metallurgical coal production was just 2.9 million t – 28% less than H1 2013. This decrease was largely caused by cost-reduction initiatives, according to the company. These initiatives led to mine plan and roster changes at Newlands, Oaky Creek and Collinsville, the latter of which was also affected by industrial issues.

Elsewhere across the company’s coal assets, South African thermal operations produced rates in line with H1 2013 – at 21.7 million t. The company was pleased to open the Wonderfontein opencast coal mine, but struggled to cope with the impact of wet weather and strike action at Goedgevonden. The company also closed two South African underground coal mines at the end of 2013.

Colombian government orders Glencore Xstrata subsidiary to merge operations at one of its coal mines.

Patrice Merrin appointed by Glencore board as independent non-executive director. 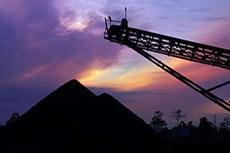 Continuing a spate of coal mine closures in Australia, Glencore has announced that it is to close its Newlands Northern underground coal mine in the Bowen Basin.