It is no secret that the global coal industry is in the midst of very troubling times. While some producers have successfully reduced costs to the extent that overall margins remain positive, coal is being produced at a loss in all regions. Furthermore, owners with assets that are generating positive cash-flows are often faced with high non-cash costs, such as depreciation or high costs of debt resulting from expensive acquisitions made at the top of the cycle. 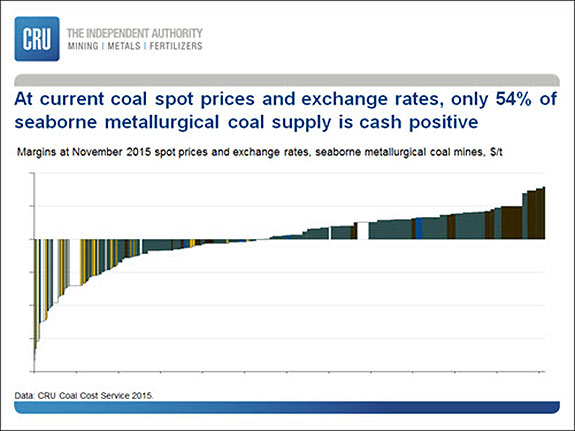 Moreover, the negative public opinion regarding the coal sector is leading to shareholder pressure to dispose of assets that, in their view, produce a commodity that will be phased-out for environmental reasons in the medium- to long-term. Over the last year, Rio Tinto and Vale have sold coal mines; BHP Billiton has spun-off coal assets into South 32; and CRU understands that Anglo American is looking to sell the Foxleigh and Dawson mines.

On the other side of the spectrum is a group of entities that believe now is a good time to step in and gain a foothold in the industry. And, in order to find a bargain, to quote a senior executive from such a company: “the more that people hate it, the more I like it.".

Certain private equity companies, unshackled by the views of public ownership, have been given mandates to acquire stakes in operating assets, as have a small number of publically-listed coal companies with healthy balance sheets and cash to spend.

New Hope is an example of such a company. In late September 2015, the company purchased Rio Tinto's 40% stake in the Bengalla thermal coal operation for US$606 million which, initially, may seem like a large amount of money given uncertain future levels of demand and other, much lower transactions in the industry that have been completed in the last year or so. Reportedly, there were at least five under-bidders and Rio Tinto was evidently happy to sell for that price. But, in the medium-term, will the acquisition create value for New Hope?

CRU's Coal Cost Services are interactive databases that profile and model costs at all major coal mines in the world. Capital and operating cost estimates are provided on a mine-by-mine basis, both for historical years and forecasts out to 2025. Costs forecasts rely, in part, on macro-economic drivers that can be flexed by users to test different scenarios. Furthermore, CRU's Value-In-Use model estimates discounts or premia specific coals will receive in the market compared with benchmark coal grades. This, in combination with price forecasts, can be used to generate a revenue forecast for each asset. 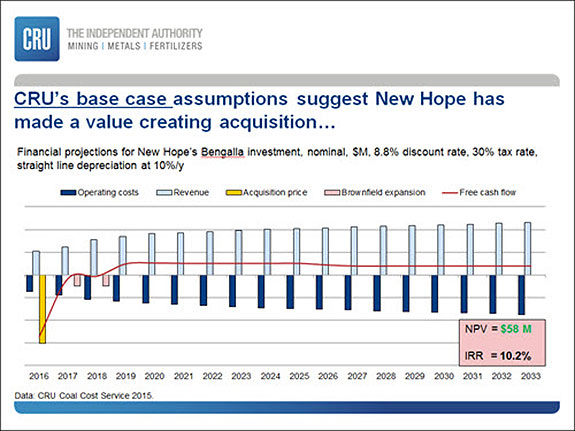 And, using the pieces of information listed above, subscribers to the CRU's Cost Services are able to estimate the value of an acquisition and also flex key input variables to test that valuation.

For example, in the chart above we have used output from the model to show CRU's projections for New Hope's share of revenues, operating and capital costs (i.e. the acquisition price paid plus capital expenses to expand output to 12 million tpy) at Bengalla, as well as calculations for free cash-flow after adjusting for taxes and depreciation allowances.

Under CRU’s base case forecasts, using a discount rate equal to its understanding of the industry weighted average cost of capital (i.e. 8.8%), CRU believes the NPV of the acquisition is US$58 million – a positive result for New Hope.

Of course, the results of this analysis are heavily dependent on future operating cost and price levels. While CRU believes its projections for both metrics are robust, CRU’s Cost Services allow users to flex a wide range of factors that impact operating costs and revenues.

For example, CRU is able to test the economics of New Hope's acquisition for a scenario whereby price levels are 10% lower than expected and the Australian dollar is 10% stronger than is forecasted. The results are presented below. 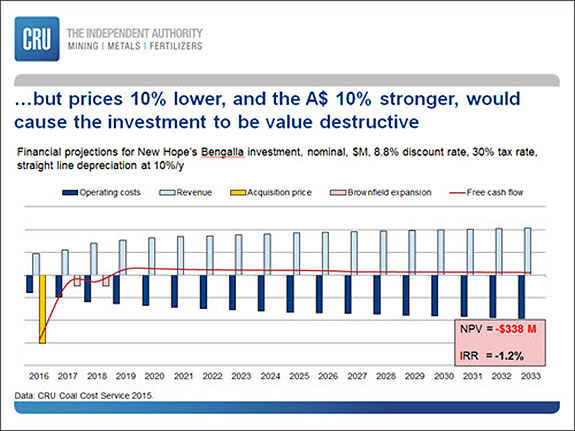 In reality, a situation whereby the Australian dollar is stronger than our base case and prices are lower than expected, is unlikely to happen given the effects of currency changes on a large proportion of the industry cost curve. Indeed, the positive correlation that exists between the Australian dollar and coal prices serves as further reinforcement that, in CRU's opinion, New Hope has acquired a good asset that, in the medium- to long-term, will create value for shareholders.

More coal assets will change hands in the next 12 – 18 months and the information and scenario testing in CRU's Coal Cost Services suggests that some of the deals that have been completed in the last year or so will benefit buyers in the long term. The current desire, or need, for certain companies to monetise assets is, CRU believes, driving down certain market valuations to below their true level.

Read the article online at: https://www.worldcoal.com/special-reports/29122015/betting-on-bengalla-3292/