It is an unfortunate fact that coal can give flow problems. The recent Global Survey on the State of Bulk Solids Handling report by the British Materials Handling Board indicated that the ten top coal producing countries supply more than 6.5 billion tpa. It is therefore not surprising that challenges arise from time to time in the many forms and processes in which coal is handled and processed. Many installations were not designed for the grades of coal that require handling. Some installations also have constraints that limit the geometry of the bulk holding facility and can impede the reliable and/or optimum performance of the equipment.

Steel production involves the production of large quantities of metallurgical coal, which is transferred from storage hoppers to coking ovens. This process demands reliable and rapid discharge from both the hoppers and the coking cars to secure optimum operating conditions. One user in the UK and another in Canada suffered serious discharge problems from banks of hoppers holding up to 4000 t of coal due to the material arching over the outlet and ratholes developing in the hopper contents (Figure 1). 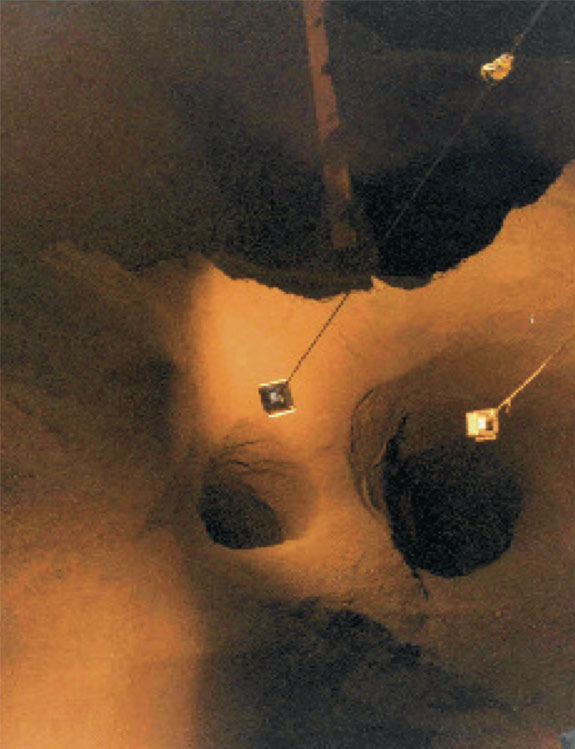 The manual rodding that was essential to maintain production was both very awkward due to the scale of the installation. It was also hazardous because of the unpredictable and erratic outflow that resulted. The construction of the hoppers generated a funnel flow pattern, whereby the material flowing through the outlet has to pass a surrounding bed of static product that offers a high frictional resistance. In both applications, it was impractical to replace the hoppers completely or enlarge the size of the hopper outlets. It would also have been a formidable and uneconomic task to modify the total hopper shape to a mass flow design, to exploit the superior flow characteristics of this form of flow regime. In any event, an assessment of the flow nature of the coal indicated that a mass flow cone or pyramid shape may not be adequate in attaining the degree of improvement considered necessary. Further, since the hoppers were not constructed to withstand the flow stresses generated by mass flow, such a conversion was not structurally permissible.

The condition of the coal used varied according to the source of supply and the prevailing weather conditions. Wall frictions tests were therefore carried out on various samples of the coal. It was established that the lower wall friction value on stainless steel, compared with the internal friction of the coal and combined with the benefits of mass flow in a plane flow channel, offered massive flow benefits and would enable reliable flow to be secured in the prevailing operating circumstances. The kick pressure developed by mass flow at the transition from active to passive stress condition structurally precluded the expansion of mass flow to the hopper walls. Preliminary designs, wall friction measurements and tests with a model also verified that an expanded flow construction would satisfy the flow and self-clearing demands of the installation. This form was therefore adopted for the modifications. The design included a multi-stage geometry to conclude with a narrow ‘V’ hopper with radius corners to secure the benefits of plane flow to a circular outlet. However, as an extra precaution to relieve the starting conditions of discharge, the final design incorporated a flow insert to reduce the overpressure of the coal in the outlet region and spread the flow channel to embrace a wider proportion of the hopper contents. The interacting flow channels of the outlet array thereby developed an elongated flow regime larger than any rathole could form.

The new hopper shape in the outlet was fabricated from prepared parts and assembled in situ. The space behind the stainless surface was then backfilled with lightweight concrete. When the first installation was completed and put into service, one of the four adjacent outlets exhibited less favourable flow that the others, which were satisfactory. Inspection revealed that, during the concrete backfilling, some leakage occurred and part of the surface was covered in a thin film of concrete. This rough surface inhibited the slip of coal and accounted for the poor local performance. Once cleaned, the whole system worked well and gave reliable service. The success of the second installation encouraged the user to consider the modification of a further installation.

A quite separate problem experienced with the transfer of coal in coking cars was that the time taken to empty the cars at the coking oven inlets was proving too long. The operator needed to provide an optimum service of delivering the coal to the many oven inlets in sequence. The hoppers were of mass flow design, so gave no problem of flow reliability, but suffered the disadvantage that the discharge rate from a mass flow outlet is less than that given by funnel flow. The number and the construction of the oven inlets that the coking cars had to serve prohibited the enlargement of the coking car outlets, so it was necessary to modify the cars internally to increase the rate of discharge. Their conical construction generated a radial flow pattern, where the circumferential convergence is Pi times the diametrical change. This induces a hoop stress that impedes the bulk deformation of the coal during discharge and slows the material flow. The contents moves reliably in a radial manner, but the work content of deforming the bulk in the annular regions detracts from rapid deformation in their converging path to the bin outlet.

It is counter-intuitive to think that placing an obstruction in a flow path can improve flow reliability, increase the rate of output from a hopper or have other benefits. However, the use of hopper inserts in various locations can offer a formidable range of operating advantages.

It should be cautioned that, while they offer varied and considerable benefits, many of which are listed below, incorporating inserts in a flow channel can raise high structural loads and their design requires a degree of expertise for optimum effect.

Inserts fitted at the hopper inlet

Inserts fitted in the body of the hopper

The rate of flow through an outlet is determined by the velocity and bulk density at which the material travels though the opening. The short distance from the stressed dynamic arch, from which the material detaches to fall to the hopper outlet, limits a conventional mass flow situation. By contrast, the stressed arch formed in a funnel flow hopper attains a higher profile, so that material falling over a greater distance passes through the outlet at a higher velocity. In extreme cases, the depth of the arch extends to the surface of the stored material, leading to the formation of ratholes. Ratholes cannot form in mass flow hoppers, because the supporting foundations are constantly moving to the outlet. Redesigning the flow system, such that an annular stress dynamic arch is created some distance above the outlet, allows the material to accelerate from a larger area and accelerate over a longer distance to a higher discharge velocity. It also allows the material to do so at a higher density, formed on what is essentially a converging chute. In this instance, flow-accelerator inserts of proprietary design were provided. These inserts restrained central flow and created a central region of lower confinement that allowed easier deformation of the annular contents around the outlet. This meant the material would fail on an unconfined surface over a larger area and deform to flow at a quicker rate.

Bulk technology has advanced considerably in recent years. Industrial education in this subject has fallen well behind the scale that is required to exploit wide-scale developments in hopper and insert design. Coal handling is a mature activity and conducted at an enormous scale. With a few notable exceptions, the limited attention of universities and other academic institutions to bulk solids technology, combined with the arguably pitiful UK output of engineers in general is leading to a growing deficiency of designers that can apply the combination of technology and experience for the optimum design of equipment for this industry. In short, the industry must pick up its game if it is to continue improving the discharge of coal from hoppers and bins.