The sharp fall in China's PCI import demand during 2015 has had a considerable impact on the seaborne PCI market. Mid-tier, Australian PCI spot prices fell into the US$50s in July, around 30% lower than at the start of the year, whereas the hard coking coal spot price only fell by 19% over the same period. Given the low level of PCI prices, PCI suppliers have been struggling in recent months and many Australian producers have found it more attractive to reduce PCI output and increase thermal coal production, given the relative price differentials.

PCI coal is a soft, non-coking coal that is finely ground and injected directly into a blast furnace and has the effect of reducing the coke rate. The primary economic benefits of coal injection are the replacement of higher-cost coking coals that are used to produce coke, the avoidance of coke plant operating costs and increased productivity at the blast furnace. Higher quality PCI has a low volatile matter (VM) content, low ash content and good grindability, but the coke replacement ratio of a coal in the blast furnace is more dependent on the energy or carbon content of the coal, with low-volatile coals having the highest coke replacement ratio. The charts below show the trend in PCI import volumes in recent years and the split of PCI exports by country in 2014. The largest PCI importing countries in 2014 were China (21.1 million t), Japan (11.5 million t), South Korea (6.6 million t), India (4.7 million t) and Brazil (3.8 million t). 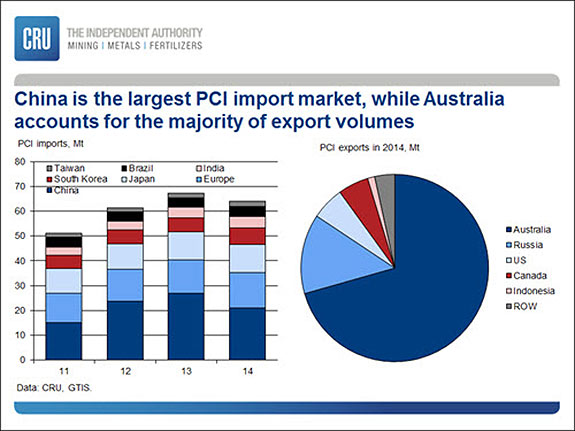 Why has China lost its appetite for seaborne PCI?

Given China is the leading PCI importer, as the country's PCI imports fell by 33% y/y in the first nine months of 2015, there was a significant impact on international spot and contract prices. To illustrate the reasons behind the weakening Chinese import demand, the following chart compares domestic Chinese metallurgical coal prices with seaborne prices. In our view, over the past 18 months, the Chinese metallurgical coal sector has become increasingly delinked from the seaborne market. As a result, a weakening Chinese steel sector and oversupply from the domestic coal industry has pulled down domestic Chinese coal prices relative to seaborne coal prices. 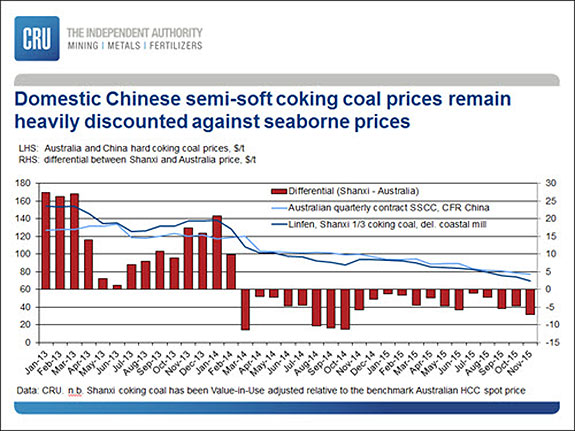 The following chart compares the Shanxi PCI price with the benchmark quarterly Australian PCI price. Domestic Chinese PCI prices appear to have been relatively cheaper than seaborne prices for a long period of time. The chart illustrates that, as PCI production in China has risen and the steel industry has stagnated, domestic PCI has pushed out imports and prices have fallen relative to seaborne prices. There was a reversion to this trend in 3Q15, when the benchmark quarterly contract price fell sharply to US73/t, FOB Australia; nonetheless, lower domestic prices appear to be reimposing themselves, as the domestic market reacts to lower seaborne prices. 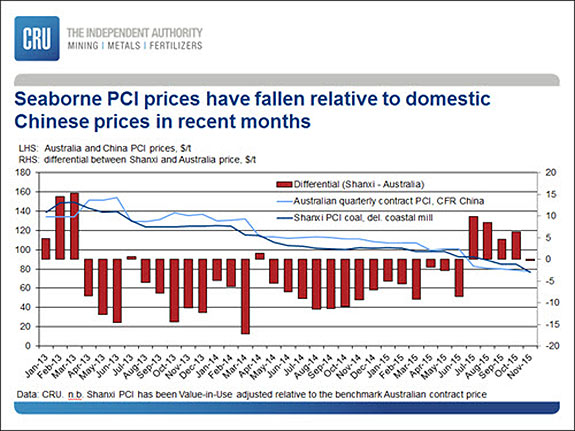 China's coal industry is expected to rebalance over time

Given the importance of China in the global PCI market, the outlook for the country's domestic metallurgical coal industry will be a key factor impacting seaborne PCI prices. The Chinese coal industry remains significantly oversupplied and the profitability of the sector has been deteriorating through 2015. This is despite central government efforts to curtail production by setting provincial-level coal production quotas and attempting to prevent the construction of greenfield projects. Amid weakening metallurgical coal demand and prices, Chinese supply has remained in play, as miners have been successful in cutting costs. CRU's Metallurgical Coal Cost Model estimates that, on average, Chinese metallurgical coal business sosts have fallen by an estimated 15% y/y in 2015. This has been achieved by reductions in labour costs, through lower salaries and through the removal of some taxes, including the sustainable development fund in Shanxi province.

Over the next few years, we believe that the central government will continue to urge production control and that smaller, unprofitable mines will close over time. As a result, we expect China's PCI production to ease. At the same time, PCI injection rates are expected to rise, as steel mills push injection rates higher in order to reduce coke rates and improve productivity. Improved supply and demand fundamentals globally will lead to a rebalancing of both the global and Chinese domestic metallurgical coal markets and currently depressed Chinese domestic prices will rise relative to seaborne prices.

We believe that the expansion of demand and steelmaking in developing economies is the driving force behind growth in PCI demand, as new blast furnaces are installed with injection capability. In addition, demand growth in mature economies is expected to improve and existing steel mills will continue to push injection rates towards technical limits. As a result, over our forecast period, we expect global demand for PCI to grow at a faster rate than for metallurgical coal (i.e. at a CAGR of 1.6% between 2015 – 2019 compared with 0.3% for metallurgical coal). In particular, India will be an important driver of PCI import demand, as steel output is expected to rise over the medium-term, whereas Indian domestic coal quality is unsuitable for blast furnace injection due to high levels of ash and low fixed carbon content.

The recent dip in PCI prices relative to the hard coking coal price is, in our view, a short-term phenomenon and prices will rise relatively, as the metallurgical coal market rebalances and injection rates rise globally. We believe that companies supplying high quality PCI (i.e. coal that has the traditional specifications for PCI, such as low volatile matter, low ash and good grindability) are likely to see strong demand through the medium-term. While this bodes well for pricing, there will always be a limit to the price steelmakers are willing to pay for an injection coal linked to the cost of coke (n.b. driven by metallurgical coal costs).

About the author: Stephen Duck is a Senior Consultant in CRU's steel raw materials team.

Read the article online at: https://www.worldcoal.com/special-reports/27112015/the-fall-in-pci-coal-prices-a-temporary-blip-stephen-duck-cru-3217/