Coal mining in Canada has borne the brunt of the disastrous global glut of supply and the associated price crash. 2014 proved to be particularly harsh for coal miners, with Walter Energy, Anglo American and Grande Cache idling operations. The result has effectively meant that Canada is left with one major coal exporter: Teck Resources. 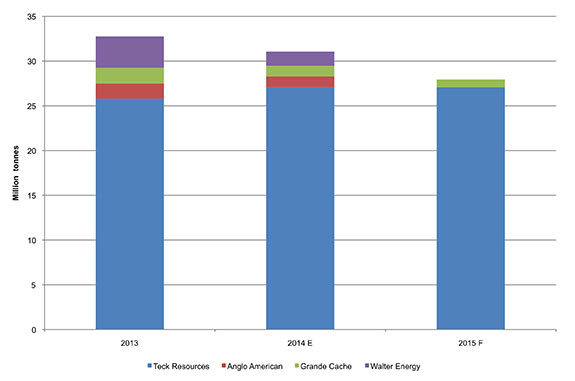 The crash in seaborne metallurgical prices throughout 2013 and 2014 has proved to be too much to bear for some Canadian suppliers, burdened by higher operating costs than their global competitors in markets such as Australia. In April 2014, Walter Energy idled its three British Columbian mines and, by the end of 2014, Anglo American had idled its Peace River operations and Grand Cache had idled its opencast operations. In contrast, Teck Resources, Canada’s largest export coal producer, increased coal production, with a 5% increase over the first three quarters of 2014. Despite this increase, coal exports fell by 7% in 2014, with a steeper decline in the second half of the year as the impact of mine idling took effect, including a 20% drop in November. A continued decline is expected in 2015, with a drop as high as 15% on 2014.

Alongside the idling, a number of promising greenfield and brownfield projects were also delayed during 2014. Notably Teck Resources has indefinitely delayed the restarting of its Quintette coal mine, which could have produced up to 4 million tpa of export metallurgical coal. Furthermore, Coalspur put on hold its Vista coal project, while Anglo American’s Roman project, which would have used the existing infrastructure at the idled Peace River operation has also been put on hold.

Looking at the future, it now appears that most of Canada’s potential, future and former producers are all awaiting a return of stronger seaborne prices in order to both restart idled operations and invest in new operations. Based on estimated operating costs for many recently idled operations and feasibility studies for new potential projects, it is likely that seaborne metallurgical prices need to increase to US$160/t FOB before any further production capacity is added. Unfortunately, price recovery to this level (metallurgical coal is currently trading at US$110/t FOB) would seem unlikely within the next 12 months. Too much new supply of metallurgical coal has been brought online in from Australia and seaborne demand growth is no longer as robust as it was pre-2013.

In the event of an increase in demand, Canada has potential to deliver increased exports as a result of investment in export capacity, particularly at their Westshore, Neptune and Ridley Terminals. Canada now has export coal terminal capacity of around 50 million tpa, which is more than adequate for current exports but also enables further projects to access seaborne markets. This access to seaborne markets can ensure that Canadian coal projects have less risk than corresponding projects in developing coal regions, such as Mozambique and Mongolia. Both of these emerging metallurgical coal producers are virtually unable to access seaborne markets. Mozambique has yet to develop a deep-water port that can handle panamax-sized vessels, while potential Mongolian producers remain landlocked with no access to a seaborne port and forced to heavily discounting price when selling coal at the Chinese border.

In summary, until we see a return of robust pricing for metallurgical coal, it is unlikely that Canada’s coal industry will witness any growth, with the exception of Teck Resources running its operations to full capacity.

About the author: Clifford Smee is the Lead Analyst - Mining at Timetric.

Read the article online at: https://www.worldcoal.com/special-reports/19022015/coal-mining-in-canada-to-2020-underutilised-assets-timetric-coal1864/