Supply and demand side developments in India will be an important determinant of future market dynamics and prices for thermal coal according to analysis in CRU's new Thermal Coal Market Outlook service.

The possible volatility in import requirements is substantial, given considerable uncertainty over both domestic supply and demand. Potential volatility in imports or range of outcomes is exacerbated by the fact that India is largely self-sufficient in thermal coal, and its imports account for only ~20% of its demand.

India's domestic demand in 2014 equalled around 80% of the global seaborne market, which means that small changes in supply and demand can have a relatively large impact on total import requirements. Even if domestic coal production was to increase, there would still be issues getting the coal to market due to logistical bottlenecks. CRU has undertaken scenario analysis of potential forecast changes to India's imports, and suggests given the wide range of outcomes, its impact will be felt by the seaborne market. 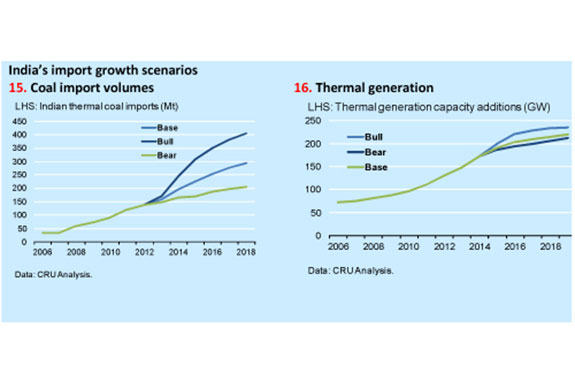 India will be instrumental in determining how much seaborne material will be available for delivery to China, which acts as the clearing market, and remains a key pricing driver. The difference in Indian import volumes between the base case and the two scenarios is 90-110 Mt on either side, equivalent in size to the entire South Korean market.

India's coal industry, in many ways, is at a cross-roads. After a number of years of less than spectacular domestic production growth failing to keep up with power consumption growth, and in turn, a significant increase in and reliance on imported thermal coal, the new Modi government has stepped up plans to increase domestic coal production and power generation. The reallocation of domestic coal blocks, interaction with labour unions and the approval of forest clearances are all signs the government is willing to push ahead with domestic output growth. Whilst the plans are aggressive and needed to reverse an almost paralysed domestic coal industry, we maintain the view that unless there are seismic changes in Indian policy and red and green tape, we are not as optimistic as the government's domestic coal production targets. We estimate Indian coal output to be 599.0 Mt in 2014 with CAGR of 4.8% between 2013 and 2019.

The imbalance between thermal coal production and thermal coal demand growth looks set to continue over the forecast period, requiring an additional 136 Mt of imports by 2019. The majority of this import growth is expected to materialise over the next three years as significant coal-fired capacity comes on stream, and CRU expects India to replace China as the world's largest import market by 2015-2016. 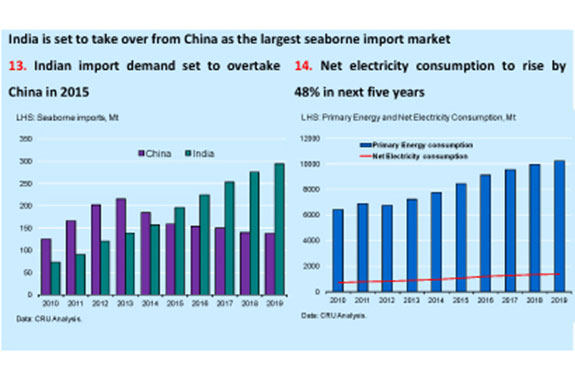 Read the article online at: https://www.worldcoal.com/special-reports/18022015/thermal-coal-price-outlook-1915/

Indian coal output may be set to increase, as greater private investment in the industry spurs innovation and efficiency gains.

According to Business Monitor International (BMI), Russia will shift its coal export focus to Asia, as the country faces competition from low cost coal producers exporting to Europe.