More than 300 students from 13 schools across Central Queensland recently took part in the Moranbah science and engineering ‘Challenge’ and ‘Discovery’ days to inspire them to consider a future career in the fields of science, technology, engineering and mathematics (STEM). 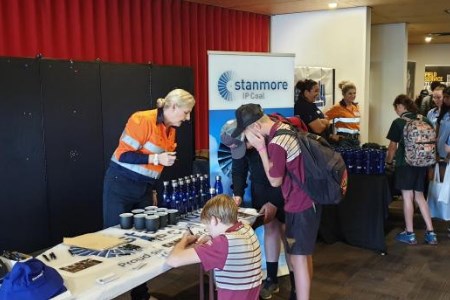 The ‘Challenge Day’ is designed for students in years nine and ten who compete in a number of hands-on activities, with a winning team announced at the end of the day. This year, students fought hard for points by designing bionic hands, building bridges, coding secret messages using lights, and creating railway routes for coal trains.

Similarly, the ‘Discovery Day’ allowed students in years four and five the opportunity to participate in STEM-related activities and take part in a science show.

Stanmore Coal hosted a stall and assisted with guiding students through the various challenges.

Presented by the University of Newcastle, Australia, this is the second year the program has been presented in Moranbah.

Read the article online at: https://www.worldcoal.com/special-reports/17052019/stanmore-coal-takes-part-in-stem-event-for-queensland-schools/