With strong considerations of minimising harm to the environment throughout the whole lifecycle of an operation – from the design and operation, to the eventual closure of operations – Anglo American has been working with Rhodes University’s Institute for Environmental Biotechnology (EBRU) to develop a promising technique that minimises disruption to local communities when mines are rehabilitated and restored: Fungcoal. Fungcoal – a portmanteau of ‘fungi’ and ‘coal’ – aims to achieve in one growing season what nature does in 60 yr by searching out and harnessing organisms that already exist in nature to speed-up the rehabilitation process.

From a sustainable development perspective, Anglo American believes in conducting business with an eye to the needs of the future. This means minimising the negative impacts of operations on the environment and local communities at all stages of the mining cycle.

The disturbance of land is an inevitable consequence of opencast mining and once mineral resources have been extracted, overlying spoils are returned to the void. The affected area must be restored to an agreed land capability and land use at the mine closure to limit the negative impacts of operations on the environment and local communities.

Conventional rehabilitation usually focuses on the shaping of spoils to facilitate free drainage, covering them with sub- and topsoil, fertilising and finally seeding. Rehabilitation backlogs and sub-standard rehabilitation would result in serious cost, environmental and community implications – all of which have a direct bearing on Anglo’s core business and licence to mine.

Land rehabilitation is extremely costly, which is why Anglo aims to rehabilitate as much as possible of the affected land during a mine’s operational life. This generally results in a better rehabilitation outcome, reduces costs and post closure liabilities.

The initiative was largely driven by an industry, and in fact, global shortage of topsoil, both in terms of quantity and quality. Topsoil is a complex micro-ecosystem and the planet has little more than 3 ft of it spread over its surface. According to the UN, the rate of loss is 10 – 100 times faster than that of replacement, which takes place over hundreds of years. This poses a real and significant threat to food production for the world’s growing population.

According to an article published in Time Magazine, a rough calculation of current rates of soil degradation suggests we have about 60 yr of topsoil remaining. Some 40% of soil used for agriculture around the world is classed as either degraded or seriously degraded. The latter means that 70% of the topsoil, the layer allowing plants to grow, has been depleted.

Fungcoal breaks down and liquefies coal that has been exposed to the elements, helping to speed up the land rehabilitation process. When accompanied with other microorganisms, the fungi generate humic and fulvic acid-like substances: natural soil organic fertilisers that are regarded as the building blocks of soil fertility and plant life.

Humic and fulvic acids have two important properties. Firstly, they promote soil microbe and plant growth and, secondly, they significantly alleviate the compaction or hardening of rehabilitated soil – one of the greatest rehabilitation challenges facing the industry.As discard coal is used as a medium on which certain grass species need to grow, its application significantly reduces the need for topsoil, while at the same time turning what is regarded as waste into a useful product. The technology has been trialled at four of Anglo American’s coal mines and has shown very positive results, both on rehabilitated mining pits and coal discard facilities. Trial sites currently cover 30 ha.

The Fungcoal system involves the identification of a suitable weathered coal that can serve as a carbon source to support microbial growth and be readily broken down and converted into humic and fulvic acid-like substances by these microorganisms (mainly fungi, but also bacteria). A mixture of this weathered coal material, coal degrading microorganisms, grass seeds and fertilisers are then applied to poorly rehabilitated soil, or directly onto opencast spoils or discard dumps. Natural root growth promoting fungi and bacteria are able to establish and populate poorly rehabilitated soil.

Since 2006, a number of trial patches have been established on a range of opencast rehabilitated land, as well as discard facilities at the Kleinkopje, Greenside, Landau and New Vaal coal mines. Success has been dependent on the procedure used (different types of microorganisms, fertiliser regimes, weathered coal source and content), with some patches performing extremely well, some performing moderately and some failing. Figure 1 shows untreated land and Figure 2 shows treated land at Kromdraai in South Africa. 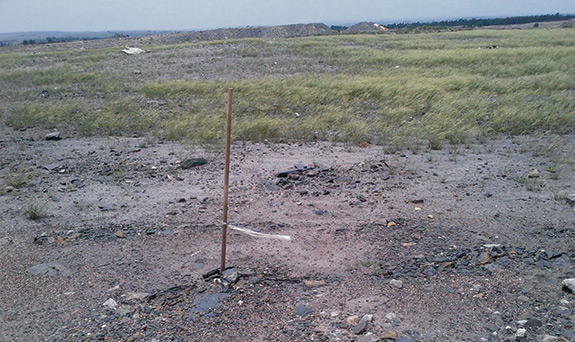 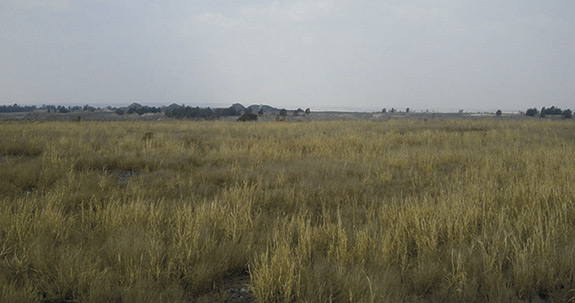 Two principal types of trials have been performed. One involves the self-cladding of discard facilities – applying the Fungcoal directly onto discard without the use of any top- or subsoil and without a weathered coal substrate. The other involves opencast rehabilitated land with the aim of improving the quality of existing rehabilitation in terms of organic content and decompaction of soil. The aim is also to experiment with establishing plant growth where topsoil is scarce or absent.

Of the dump self-cladding trials, one was a failure as the initial growth of the first two seasons withered during subsequent seasons and has mostly died off. The other dump trials were more successful, with one of the earlier trial patches from 2006 being very successful, showing soilification of the discard material down to a depth of 0.5 m in 2014.

The trials on opencast rehabilitated and un-rehabilitated land have shown similar results with some trial sites being very successful, others less so. Again, this has depended on the type of weathered coal locally available and on the other factors mentioned above. It has been shown that the weathered coal from the Kromdraai Section of Landau coal mine is eminently suitable for use in the Fungcoal system and this weathered coal is associated with the best results to date.

Apart from accelerating and improving the quality of rehabilitation, the application of Fungcoal – following approval from the relevant regulators – will have far-reaching cost benefits. While these numbers cannot easily be quantified in the product’s application for opencast pits owing to variable circumstances, its savings on dump rehabilitation may result in significant savings for Anglo’s South African coal business and the coal mining industry.

This would be achieved either by eliminating the need for topsoil entirely or by significantly reducing the quantities required to achieve the desired rehabilitation outcome.

Whether Fungcoal can be replicated at different sites depends on a number of variables. In the first place, a suitable source of weathered coal needs to be available within a reasonable distance to the site. Should the distance be too great, it is likely that conventional rehabilitation with sub- and topsoil would be more cost effective.

Additionally, the medium on which the Fungcoal is intended to be applied, whether it is coal discard or opencast spoils, needs to be suitable. Where the medium is acid generating, or more precisely where the acid neutralising capacity of the medium is insufficient, Fungcoal will probably not succeed.

Importantly, Fungcoal needs to fit in with the expectations of interested and affected parties, particularly regulators and local communities. Where the purpose of rehabilitation is to create a stable land form for grazing or wilderness land use, Fungcoal is probably suited in most instances. Where the land has to be returned to high-quality arable capability, Fungcoal on its own may not be adequate, although it may support improvement of the quality of rehabilitation in terms of organic content and decompaction of the soil.

While the technology has been patented, Anglo American has taken a decision not to use it to pursue commercial value, but to improve the quality of rehabilitation across the mining industry for the benefit of the natural environment and communities that host mining sites. The company has shared the technology and research in various scientific and trade publications. In doing so, Anglo American seeks to progress the development of Fungcoal by gaining wider acceptance across the sector and increasing its use, as well as engaging with regulators and continuing to monitor the trial sites over time.

Edited by Jonathan Rowland. This article first appeared in the August issue of World Coal.

About the Author: Henk Lodewijks is Mine Closure Manager at Anglo American Coal South Africa.

Read the article online at: https://www.worldcoal.com/special-reports/13082015/planting-the-roots-for-land-rehabilitation-2700/