Coal is and will continue to be the backbone of India's economic and development growth. India has the world's fifth largest coal reserves and is also the world's third largest producer and importer of coal.

The issue for India is that the gap between domestic supply and demand is growing at a phenomenal rate. This gap is being filled by imported coal and the graph below shows how it is rapidly increasing. 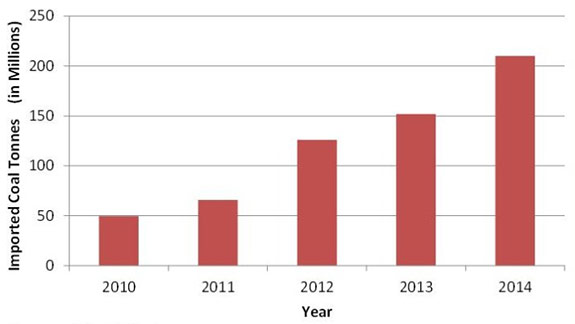 Despite India's efforts to reduce the volume of coal imports, it appears that the demand for coal is outpacing all of the actions. It is difficult to see this trend reversing anytime soon, unless there is a major delay in India's plans for development in its economy and infrastructure. Here are three main reasons why India's coal imports will continue to grow.

Despite India holding the fifth largest coal reserves in the world, domestic coal production has not come close to meeting domestic demand. People will point to politics as the main culprit and the recent ‘coal-gate’ saga is a good example of that. True, it has been a setback for the Indian coal industry, but I don't think this will be the major issue for the future. Even if the political issues are resolved, the major issue will be the availability of land to construct new coal mines and infrastructure.

India has the second largest population in the world and it is a very crowded country. So to build new mines and infrastructure you have to relocate the people currently living there. The issue is where do you find vacant land in India to construct new townships. You don't – and that is a major reason why new coal mines have not come online in India. A recent example is Reliance Power cancelling the Tilaiya Ultra Mega Power Project and associated 40 million tpa coal mine, stating that it was due to the government not providing the required land. This is also why the major Indian companies (including Coal India) have been on a shopping spree to purchase mining leases outside of India.

To produce the coal is only one part of the process. Transporting the coal to the power plants is another challenge altogether. India has a vast railway network, yet connectivity from the coal mines to the power plants on the coastal regions is a major bottleneck. Coal India's plan to produce 1 billion tpa relies heavily on improvements to the rail network. The Indian government has acknowledged this issue and is exploring joint ventures between Coal India, Indian Railways and various states. The issue is that they are only now just exploring the options, which will be some years before the necessary work is completed. The issue of securing domestic coal supply for the coastal coal-fired power plants will continue and the most viable option will be to continue to import coal.

The international price for coal has lowered considerably in the last several years as has the shipping freight charges. Imported high-energy coal is now a lower cost than similar coal purchased from Coal India for a large number of coal-fired power plants. As the cost of imported coal has decreased, the price of domestic coal has increased over the same period of time. This is causing a number of Indian power companies to increase their purchase of imported coal. India's largest power generator, NTPC, is reportedly considering increasing its share of imported high-energy coal.

The Indian Government may wish to end coal imports in the next 2 – 3 yr; however, it would appear that that timeframe is simply not possible. With coal imports rising considerably over the last several years, forecasts are that a similar trend will be realised in 2015. Coal transport and the lower cost of imported coal can change in India's favour, but the land availability issue will only be exacerbated as Indian's huge population continues to grow.

About the author: Russell Taylor has over 20 yr of experience in the coal mining industry as a mining engineer, project director and mining executive. Most recently, he was Executive Vice President and Project Director at Reliance Coal Resources in India.

Read the article online at: https://www.worldcoal.com/special-reports/12052015/why-indias-coal-imports-will-continue-to-grow-2257/