To read the full article
"What lies beneath? "
Please sign in or become a member for FREE 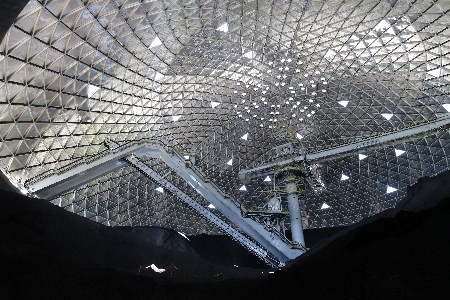 The Mindanao region of the Philippines faced near daily power shortages in both the wet and dry seasons. With hydropower accounting for more than half of the region’s electric generation capacity, power was often available for only 12 hrs a day and economic growth in the region had been limited.

Since seasonal variations in water levels contribute to power shortages, a reliable complement to renewable generation was needed. Black & Veatch was selected to lead the development of the Therma South 300 MW circulating fluidised bed coal-fired plant near Davao City, Philippines. The plant helps supplement the power generation needed to meet baseload requirements, while reducing the frequency and duration of power shortages.

As a result of Black & Veatch completing its prime engineering, procurement and construction (EPC) role, more reliable electricity is improving the daily lives of millions of residents and businesses in the Mindanao region. To date, more than 20 electric distribution utilities and electric cooperatives have signed up to receive additional power from the Therma South facility.

Aboitiz Power Corp., the plant’s owner, and Black & Veatch worked to stay in advance of environmental standards for the handling and storage of coal. The plant features the Philippines’ first coal dome. The enclosed, but well-ventilated, dome’s primary function is to minimise the surface area on which coal dust can settle. It also provides safe storage for the plant’s fuel supply.

The dome is fast becoming an iconic structure. Pilots are rumoured to use the large crystal building to guide their way into Francisco Bangoy International Airport in Davao. The fact that it is even standing tall, however, is due to the innovation during the construction of the facility – hard to appreciate from 10 000 ft.

Beyond the sparkle of the eye-catching dome, Therma South is indeed built on solid civil engineering and construction planning and execution. Located next to the sea, at the confluence of two rivers and in a seismic zone 4, the soil is silty and vulnerable to erosion and other extreme environmental conditions.

The company’s pre-construction planning, before it had even submitted its EPC bid to Aboitiz Power, was key to construction remaining on schedule, and it is what is often missing from other contractors when building power plants in Asia.

The more the company investigated the soil, the more it learnt. Discrepancies in the data using different tests highlighted the complexity of the overall soil conditions.

A constructability programme was devised in the proposal stage to enhance the plant’s design, tighten the delivery schedule and ensure everything was done with the construction process in mind.

Such advanced project management was needed. The artesian groundwater conditions made it very difficult to collect reliable soil information during subsurface investigation and geophysical testing. Electronic piezometers, seismic cone penetration tests, continuous flight auguring and multichannel analysis of surface waves were some of the techniques used to help gather information. However, until the construction work actually began, the true extent of the groundwater was not fully understood.

Think of the site as a block of Swiss cheese. Every time Black & Veatch bore into the ground to install a foundation or pile, it received new information and used this to continually evolve its design. It was a very dynamic scenario that required constant diligence and re-evaluation. Then the company encountered the limestone shelves.

Unexpected limestone layers were discovered at the site at various locations and depths. The weak soils beneath the limestone shelves meant that it was not possible to terminate the piling in the limestone itself. This new technical challenge threatened to increase the amount of time required to drive the piles and increased the risk of pile damage.

To avoid the risk of delay and increasing costs, the team decided that the piles in the limestone layers would be pre-drilled through the limestone shelf to reach solid bedrock. The civil, structural and geotechnical engineering team also had to design the power plant for the highest possible earthquake loads. The combination of silty soil in an earthquake zone created a further challenge: liquefaction.

Modelling earthquake events in the prevailing site conditions showed that the soil could develop properties of a liquid and become unstable and unable to support the load of the structures. Such understanding only heightened the importance of piling activity, as structures not supported by piles would be subject to massive settlements in such seismic incidents.

Additional preventative measures were taken to counteract the liquefaction potential. This included the installation of stone columns, as well as vibro compaction and soil densification through pile driving. Studies were also performed to understand the expected movements of flexible offshore water pipes and design tolerances were adjusted to allow movement without damage.

When earthquakes did strike the area during and after construction, the design coped, thereby preventing damage or structural failures.

Therma South units 1 and 2 are now a fully operational circulating fluidised bed coal-fired power plant. Officially opened by the country’s president in January 2016, it is the first major power plant to come online in nearly 10 years in Mindanao, now serving an expanding economy and population in the region. The additional 300 MW of baseload power added to the grid is expected to help alleviate the daily power cuts faced by millions of Filipinos and complement the seasonally affected hydropower facilities in the region.

Drawing on its long-established Asian-based execution and procurement centres, the Black & Veatch team provided balance-of-plant engineering and procurement services. The company was also responsible for providing the EPC solution for material handling, plant-wide fire protection and offshore piping for cooling water, in addition to site management and commissioning services.

Read the article online at: https://www.worldcoal.com/special-reports/11102016/what-lies-beneath/