Investing in the Indonesian mining sector has the potential to be very profitable, but navigating the investment landscape is fraught with difficulties. The unpredictable regulatory environment is only part of the challenge: dealing with political personalities and vested interests is just as critical. Indonesia’s emergence from the global financial crisis led to an upsurge in nationalist sentiment that both last year’s presidential candidates, Joko Widodo (the eventual winner) and Prabowo Subianto exploited during campaigning. For the mining sector, this is a negative turn of events, as nationalism continues to manifest itself in a tightening of regulatory policy.

Any optimism from the mining sector surrounding Widodo’s presidency needs to be tempered with recognition of the challenges he will face from Indonesia’s fractured politics. Without a reliable parliamentary majority, combined with Widodo’s inexperience of federal politics, the new president will have to overcome significant challenges to govern effectively.

As mayor of Solo and later the governor of Jakarta, Widodo’s public appeal was as a man of the people; but in Indonesia, it is big business and the right family connections that make powerful politicians. Indeed, many in the establishment saw Widodo as a threat to hierarchy and the traditional patronage networks. Lacking ties to the country’s elite and the influential private sector, Widodo’s technocrat cabinet selection was a clear signal that he would stand firm on his promise not to grant political favours. A bold decision – but one that may come back to haunt him should Indonesia’s business elite need to be swayed.

In addition, Widodo will be wary of making significant mining reforms, on account of strong nationalist sentiment within the government. While keen to enforce a level playing field across the coal industry, new plans to change the regulatory environment will do little to entice investors. For example, miners must now get approvals from mining and trade ministries before exporting cargoes, which will come as another costly delay to mining firms. While positive in principal, additional layers of regulation – particularly across multiple ministries – will be a further deterrent.

Bowing to the interests of foreign mining firms during his first few months in office would be seen as an affront to voters, the political cost of which would be too high for Widodo to take so early in his presidency. As such, foreign mining investors will likely see a continuation of the cycles of volatility that have characterised the Indonesian investment environment since 1999.

Consistent with his campaign commitment to strengthening Indonesia’s energy security, Widodo is expected to support the proposed cap on coal production, which is designed to contain prices in the short term and preserve capacity in the long term. Nevertheless, domestic coal companies remain incredibly influential, with many owned by politically connected families. Such companies as these are likely to use their political influence to push the government to allow modest increases and allot them to their firms. Several companies may stand to benefit, including Adaro Coal, Bumi Resources, Bayan Resources and Indika Energy. Constrained by a parliament with strong nationalist bias, yet recognising the role that miners have to play in bolstering government revenues, Widodo will have to walk a difficult tightrope in the short term.

For foreign mining investors, the operating risk environment is unlikely to change overnight and political risks – particularly in respect of contractual agreement repudiation and expropriation – are likely to remain elevated. Mining companies with Contracts of Work and mining business licences (IUPs) in place recognised – during the last year in particular – that these contracts do not offer suitable protection. While investors of course have a role in shaping the risk environment in which they operate, shifting regulatory policymaking and a changing legal framework creates a difficult challenge. New laws, particularly those applied retrospectively, can cause unanticipated costs that can quickly dissolve margins.

Unfortunately, Indonesia’s government has proven that the regulation of the mining sector is a moveable feast. Rules that govern operations (everything from how local resources, such as water, are used, to what workers should be paid), counterparties (in respect of divestment of shares and ownership structure) and local stakeholders (investment in community projects to enhance security), could change again under Widodo’s new government. Terms enshrined in existing contracts today may mean relatively little in six months’ time. Investors, as has been seen with the requirement for miners to invest in domestic smelters, will be expected to bear the burden of the costs associated with compliance of new laws, which can be particularly difficult during times of suppressed commodity prices. 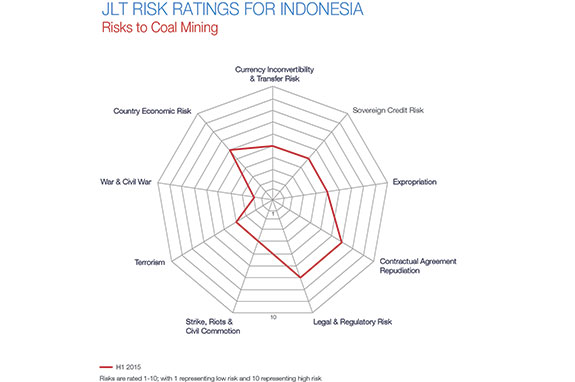 For Indonesia’s miners, the risk environment remains complex. Security risks, such as protests, acts of terrorism and worker strikes, will continue to require a robust risk management response. The violence seen at Freeport’s mining sites in the past are testament to this. Yet while experienced operators may have established measures for dealing with political violence threats to property and personnel, the last four years have proven that political risks must now remain firmly on the agenda. The next challenge is to start proactively anticipating, mitigating and occasionally transferring political risks of government interference, regulatory heavy-handedness, industry discrimination and legal flux – before these risks return again to hit the balance sheet.

Written by Amy Gibbs. Edited by Jonathan Rowland. This is an extract of an article that first appeared in the March 2015 issue of World Coal.

About the author: Amy Gibbs is a Senior Consultant (Credit, Political and Security Risk) at Jardine Lloyd Thompson.

Read the article online at: https://www.worldcoal.com/special-reports/09032015/regional-report-indonesia-a-new-hope-amy-gibbs-jlt-specialty-coal2033/