Dorstfontein coal mine in Witbank, South Africa, is located approximately 2 hrs from Johannesburg. In October 2011, a two-man engineering team from PEBCO, US, travelled to South Africa to spend approximately one month performing start-up testing on Dorstfontein’s PEBCO batch weigh train loading system. Before start-up, the loading system needed to be completely installed, all field piping installed and flushed, all electrical wiring pulled, landed, verified and rung out, and continuity checks performed. 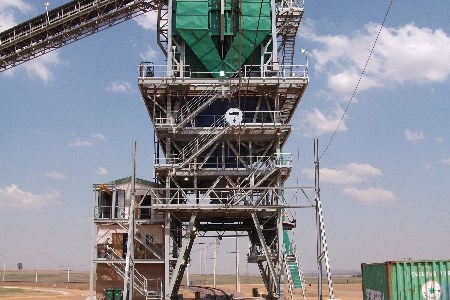 The first couple of days of testing entailed a complete system walk down of mechanical, hydraulic and electrical areas. Next, internal cleanliness of the HPU reservoir needed to be verified, then filling of the hydraulic reservoir. Pressure testing came next for all hydraulic fittings, piping and hosing by increasing system pressure at intervals until full system pressure had been reached.

Operational testing of the various gates and the telescoping chute by manual actuation of the control valves was tested. This was carried out in several steps and worked up to full system pressure.

Once the team was 100% satisfied with the manual operation of the system, team members checked the controls to verify that the same gate or chute functions exist via the control system. Once verified, the team moved on to fine tune gate movements by adjusting the ECM4-L2 amplifier cards for the electro-hydraulic control system.

Because the accumulators had not been charged and/or offline up to this point, they were then charged with nitrogen to bring them online. The full system pressure operational testing was then repeated.

After completion of the above and when all of the field welding has been completed and lightening protection installed, the team was able to move on to removing the dummy load cells and replacing them with the actual load cells. In order to properly adjust and shim the load cells, test weights needed to be hung off of the weigh flask and tested for accurate calibration of the weighing system. A surge bin was filled with coal and a railcar was placed under the loading system for hauling off the material used in the calibration process.

Once the weigh flask was certified, the team was ready to run test trains in order to verify photo-eye placement. At that point, the conveyor feed system and conveyor was in full operational status.

In order to maintain the highest level of integrity and speed of response, a programmable logic controller (PLC) provides control and interfacing with the real-world devices, such as gates, photo eyes and other critical components of the system. Where necessary, this system, in conjunction with the programme, adheres to a fail-safe principal, such that, in the event of power loss during loading, there can be no spillage and the system will automatically reset on power up. Interaction between the PLC and the scale will be via direct serial cable connection, ensuring the fastest possible response as required to obtain optimum accuracy.

Written by Ralph Story, PEBCO Inc., USA. This article first appeared in World Coal December. To read this and much more, register to receive a copy here.

Read the article online at: https://www.worldcoal.com/special-reports/08122016/put-to-the-test/