The world is attempting to move towards a more ‘green’ environment to avoid catastrophic climate change. And while this effort has resulted in energy-producing technologies that are more efficient and ‘cleaner’, it has yet to unearth a green energy source (or sources) that can completely fulfil the world’s ever-increasing energy demand.

Despite the negative sentiment against fossil fuels (coal, oil, shale and natural gas), these fuels played a key role in the western world’s industrial development and modernisation. Today, the developing nations of Asia and elsewhere are following the model of Western capitalism and free market economies. The creation of new jobs, wealth and a growing middle class in these regions is creating an exponential increase in energy demand.1 Many of these nations are endowed with indigenous coal resources and are forced to use these resources to meet their energy demands. Unfortunately, most of those opposing the use of these energy sources are merely discussing the problem and its ramifications while an economical solution has yet to emerge.

Even if it were possible, the immediate and complete abolition of fossil fuel use would wreak havoc around the world. Without an immediate source of alternate energy that’s cost-competitive with fossil fuels, baseload electricity and heating costs would skyrocket and millions would remain without power. Electricity supply would be subject to brown outs and power shortages.

Is it is possible to strike a compromise between two contradictory objectives: supplying low-cost energy via fossil fuels, while minimising greenhouse gases (GHG) and other emissions? The answer is a resounding “yes” and has been in development and testing from US-based Clean Coal Technologies Inc. (CCTI). Following several years of research and development, CCTI is preparing to commercialise its Pristine-M™ technology. This new patented technology will enable coal to provide an economical and environmentally ‘cleaner energy bridge’ to the future until alternate energy sources are available to economically satisfy the global demand.

CCTI’s process concepts are built on refining coal before use. Unlike, crude oil or natural gas, coal is used without refining. Refining removes certain inherent pollutants from fossil fuels to produce lower emissions. Crude oil is refined through distillation and fractionation into cleaner-burning products, such as gasoline, diesel, aviation fuels and furnace oils. Natural gas from the wellhead is purified to separate out unwanted hydrocarbons, water vapour, hydrogen sulfide and other gases to produce ‘pipeline quality’ natural gas used by consumers. Typically, however, coal is used as mined, except for washing in a preparation plant – a process that only removes rocks, mineral matter and middlings, but none of coal’s inherent elements, such as organic sulfur, mercury and organic compounds. These elements are converted into hazardous oxides in coal-fired combustors, diluted with large amounts of fluegas. The capture of these dilute pollutants is acostly add-on for coal use.

CCTI’s Pristine-M technology strives to refine coal by removing pollutants from coal before use. Doing so enables pollutants to be captured in their pure, undiluted state and in much smaller volumes for disposal or re-use elsewhere. The Pristine-M technology will eliminate costly post-combustion pollutant removal technologies (such as fluegas scrubbers) and scrubber waste and reduce carbon emissions/MWh. In addition, the technology may be readily modified for other applications, such as biomass torrefaction, gasification feedstocks and coal-to-liquids (CTL) applications. These are described in more detail in the ensuing sections.

The bulk of the world’s coal reserves are low rank or sub-bituminous coal.2 Their use has increased over the past few decades owing to their low sulfur content that reduces sulfur gas emissions after combustion. However, their low sulfur content is accompanied by high moisture contents and organically bound metallic elements that produce toxic vapours after combustion, and low heating values compared with bituminous coals. CCTI’s patented Pristine-M process reduces the moisture content of low-rank coals, while also stabilising and sealing the treated coals to prevent moisture re-absorptions and spontaneous combustion. The process also increases the heating value of low-rank coals to values comparable with bituminous coals.

Coal gasification is an innovative method to convert coal into electricity, hydrogen and other valuable products. Even within a single geological formation, coal differs in its inherent characteristics, i.e. moisture, ash, sulfur, carbon content, etc. Gasification costs are influenced by the variability of the coal, its moisture content and inherent pollutants that require both the drying of the coal before the gasifier inlet and the cleanup of the syngas after the gasifier outlet. The Pristine-M process may be modified to produce the ‘ideal’ coal feedstock to a gasifier that promises minimum variations in coal quality with near zero levels of moisture and pollutants. The costly operations of coal drying and syngas cleanup in coal gasification are thereby avoided. This in turn simplifies the design, footprint, operation and cost of coal gasifiers and the subsequent production of liquids from coal.

All coal preparation plants must discard coal below a certain size – termed coal fines. These fines often contain high heating values with low ash contents, but their top size and size distribution prevents their use in coal sales to utilities. Consequently, they are discarded into tailing ponds where they become contaminated with fine ash from preparation plants and flyash from combustors. According to studies at the US National Energy Technology Laboratory, over 2 billion short t of coal fines lie in tailing ponds east of the Mississippi River.3 In addition, about 50 million short tpy are produced from coal preparation plants. These fines are considered a sociological, ecological and environmental hazard.

Several methodologies have been proposed for the recovery of coal fines.4 However, none to date has attracted much commercial interest, likely due to factors associated with fine coal use, including storage, handling and transport. In addition costs are associated with moisture removal and the potential need to briquette fine coal in order to produce a coal suitable for handling and transport with existing coal handling systems. The Pristine-M technology may be used to convert these fines at a coal preparation plant (before being discarded into tailing ponds) into value-added products, instead of a waste-stream. These value-added products include feedstocks for pulverised coal injection in the iron and steel industry, in electric arc furnaces and for activated carbon manufacture.5

Co-firing biomass with coal is a potential pathway for coal-fired power plants to reduce carbon emissions but, due to limitations in existing boiler designs (heat transfer patterns, combustion air requirements), the amount of biomass that can be co-fired with coal is around 15%. Technologies are under development to convert biomass into a high-density fuel to offset the limitations of biomass combustion and co-firing with coal. At present, torrefaction is one of the technologies that appear commercially viable where biomass is heated to around 550°F in a near-inert atmosphere for 30 – 60 min. The Pristine process may be used to torrify biomass, but with significantly lower process times. The resulting product is biomass fuel with properties similar to coal and significantly higher energy densities than the original biomass, making it a potential fuel for co-firing with higher blend levels.

Some test results are shown on Table 1 to depict the type of moisture and volatile matter reductions and increase in heating values that may be obtained by the process.

These results are provided primarily for guidance and information and should not be construed as definite, due to the variability of the feed coal samples used in the process. End results displayed by the product coals can be adjusted to suit the requirements of individual customers by changing process parameters. CCTI plans to conduct extended tests (12 – 16 hr duration) to obtain several samples of data under similar conditions for statistical evaluation and validation. Along with these tests are tests for the optimisation of the various operating parameters pertaining to the process.

CCTI has succeeded in all three areas. The feed coal, which requires no pulverisation, retains most of its initial size distribution, and, consequently, the final product requires no briquetting or pelletising.

CCTI’s Pristine-M process is a continuous process comprised of three separate stages. This is depicted in Figure 1. 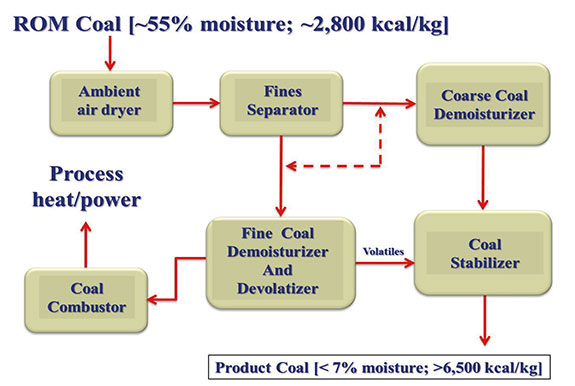 The first stage comprises a dryer using a technology to maintain optimal heat exchange with a minimal footprint. Drying takes place at a temperature calibrated to remove moisture from the feed coal to the desired level – usually 10%. When excessive fines (i.e., coal particles with mean particle size < ¼ in.), are present in the feed coal, the fines may be processed separately or combusted to provide process heat, whichever option proves to be economically most feasible for the specific application.

In the third stage, the volatile matter is fed into a specially designed vessel that allows the volatile matter to be absorbed and adsorbed into the pores of demoisturised coal from the first stage. Volatile vapours penetrate into coal pores voided by the loss of moisture, as well as coat the surface of the coal. This action seals the surface of the coal, thereby preventing any moisture reabsorption, spontaneous combustion and any tendency to disintegrate. Tests conducted indicate that coal samples treated by the Pristine process have survived for over six months outdoors, unsheltered, without reabsorption of moisture or any spontaneous combustion. This is sufficient to indicate that the treated coals can sustain typical ocean or surface transportation and storage periods in coal yards.

Following several years of R&D, CCTI contracted with a leading US Fortune500 company to design, build and test a prototype of their process at approximately 1/10th commercial scale. The commercial design is centred on the use of 30 short t/hr modules that operate continuously at atmospheric pressure. They are configured to operate independently and in parallel to each other, thereby allowing individual modules to be taken offline for scheduled/unscheduled maintenance or unplanned breakdowns without interruption to the other modules. Additional capacity, as and when required, is provided through additional modules. By incorporating commercially available off-the-shelf components, the design avoids the need for custom-built equipment that adds to the capital cost of the plant.

“CCTI recently completed the construction of its second pilot facility located in Shady Point, Oklahoma, US. Figures 2, 3, and 4 show different views of the pilot plant together with personnel to show its relative size. The plant is controlled and operated through a sophisticated process control system that adjusts plant parameters in real time to accommodate varying feed coal quality and optimise production.

Tests are being conducted with a coal from the Powder River Basin. Once sufficient data has been collected on this facility, its design will be reviewed, updated and scaled up to a 30 short t/hr commercial module. The commercial module will be replicated in a commercial facility to accommodate higher throughputs.

The pilot facility will be kept operational for quick tests on new coals to determine operating parameters for the commercial module(s).

About the author: Robin Eves is President and CEO of Clean Coal Technologies Inc.

Read the article online at: https://www.worldcoal.com/special-reports/08062016/clean-green-and-pristine-clean-coal-technologies-robin-eves-2016-918/