Since the early 1900s, the ash fusibility test (AFT) has been used to predict deposition behaviour of coal ash in large coal-fired boilers. The modest beginnings of the test required an operator to watch a pelletised ash sample through a viewing port and identify four temperatures, which correspond to four characteristic points or characteristic temperatures (CTs) (Figure 1) in the melting process of the ash pellet. A comprehensive study in the late 1990s reviewed the consistency and reproducibility of the test. The job of the operator was viewed as being too subjective with huge discrepancies observed between tests carried out by different operators – and even when the same operator performed the same test twice. Variations as much as 30 – 50°C were seen with the same operator and the same sample and up to 400°C difference between laboratories for the initial deformation temperature (IDT). This variation was, in part, caused by the way that the compressed pellets were made for which only basic instructions were specified. 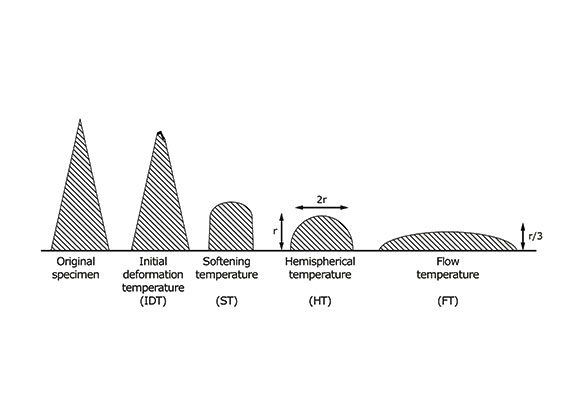 In addition to repeatability and reproducibility issues, the perceived relevance of the four CTs in predicting the onset of slagging and fouling varies widely across the industry. Some only use the initial deformation temperature as the onset of ash stickiness, which can be a trigger for potential slagging issues, while others only refer to the flow temperature as it relates to the temperature where the ash is sufficiently melted to flow down the furnace.

Furthermore, recent efforts towards reduced CO2 emissions have led to a surge in the use of biomass as a replacement for coal in some power plants. This brings a new set of challenges with changes in initial mineral content and combustion performance, including up to three times the volatile content and elevated levels of potassium and sodium, resulting in increased potential for fouling.

The increasing need to operate boilers efficiently and the economic need to be flexible with global fuel procurement means that it is vital to develop and possibly adapt the AFT process so it can provide rapid and accurate data. Power generators currently use the AFT as a means of predicting if a coal or biomass might create high levels of slagging and fouling. Quite often the data is only scrutinised after the fuel has been used, when ash deposits have already built up.

The four CTs would be estimated by an operator manually scanning through the images collected from a heating profile, from a furnace/camera system. Until recently, AFT systems worked with an analogue camera capturing images at a resolution of 752 by 582 pixels. These images would be captured at a rate of (up to) one per °C during the heating profile from ambient to 1500°C+ at a heating rate of up to 10°C/min. This type of system saves images over the duration of the test to allow the operator to retrospectively pinpoint the four characteristic temperatures of the ash melt on screen to the nearest 1°C. Each test runs with multiple samples positioned on a place holder, allowing multiple samples/repeats to be tested at the same time. Each run requires a five hour turnaround from initial acquisition of the coal ash for pressing into pellets to analysis of the CTs.

The steps towards an enhanced ash fusion test

Over the past decade, the use, process and applicability of the test has changed; there have been developments in alternative techniques and advances in the automation of the process.

The new ash fusibility furnace CAF G5, released by Carbolite Gero (Figure 2), has been upgraded in two key areas in order to address the problems of subjectivity and the emergence of biomass in the generation portfolio – namely better imaging (using a higher resolution camera and the addition of better in-situ lighting) and also the introduction of semi-automated image analysis. For better imaging, the system’s camera has been upgraded from an analogue system to a HD 1.3 Mb with 1280 by 1024 pixel image size. This gives a manual operator a crisper image to identify shape changes when in manual mode, helping to more accurately pinpoint the fusibility temperatures. 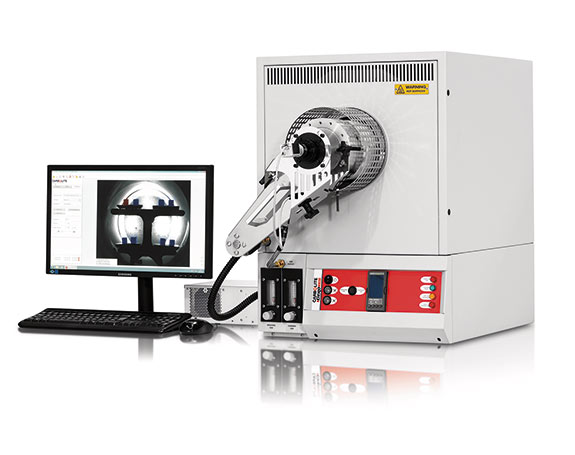 One problem with the analysis of biomass ash samples was the issue of poor internal lighting at low furnace temperatures. Coal ash samples generally have a higher initial deformation temperature (IDT) – or the first point of melting – than biomass ash; the first melting event for biomass can be considerably lower. At 650°C, enough radiant light is emitted in the viewing chamber to see the samples clearly. Below 650°C, however, it is too dark for the camera to collect usable images so any melting events are missed.

A new design was needed that was not only able to light the internal areas of the furnace but also robust enough to withstand the 1600°C temperature in the chamber. The new CAF G5 digital has solved this with a quartz rod through which a light is shone at low temperatures into the back wall of the chamber. This light then turns off at around 650°C once there is sufficient radiant light inside.

The second step towards the evolution of this furnace has been to address the issue of subjective identification of the images to identify the CTs. The new furnace includes an ‘automatic option’ feature whereby the fusion temperatures are recorded by a programme in real time. This is based on the criteria documented in the universal standards for ash fusion testing that the operators would be using in their analysis.

Carbolite Gero has incorporated some of the conceptual work from The University of Nottingham (by Cheng Heng Pang, Tao Wu and Ed Lester) into its new ‘automatic option’ in which an ash fusion profile is produced with the ability to plot multiple variables against temperature and time. A typical analysis profile is the plot of sample height/initial sample height (H/Hi) against temperature (Figure 3). This allows the user to see the profile created across the whole temperature range, rather than simply four characteristic temperatures. It is clear from these profiles that the use of four temperatures to describe the onset of a ‘phase change’ might not fully describe the behaviour of an ash sample. The concept of a full temperature profile was previously shown by the authors to act as a ‘fingerprint’ of the fuel. The new Carbolite Gero system is effectively a semi-automated system since it currently requires the operator to define regions of interest where the pellets are located before automated processing can begin. 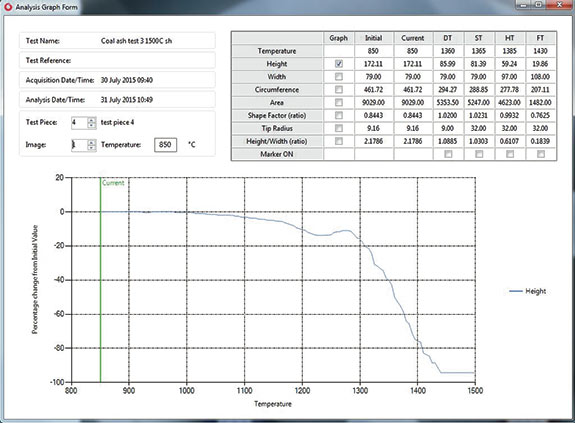 A research programme is currently underway at The University of Nottingham, UK, funded by the Biomass and Fossil Fuel Research Alliance (BF2RA), to fully automate the process to create an advanced ash fusibility test (AAFT). The BF2RA programme uses this new ash fusibility furnace to generate a new profiling system that can calculate the CTs but also produce a method of interpreting the shape of the pellet (height, perimeter, circularity etc.) to predict boiler performance without reference to the CTs. The image analysis and data processing stages all benefit from the advancement in the camera definition (from the old furnace to the new), with the improvement in image resolution resulting in less noise across the temperature range (Figure 4). 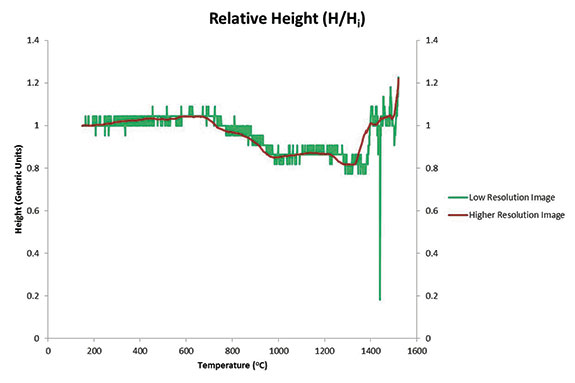 Potential for re-defining AAFT use in ash characterisation

If ash fusibility is to continue to be used by industry then it needs to be accurate, rapid and relevant to the needs of the modern boiler operator, who sources and burns a wide range of fuels (from coal to biomass) and with blends of coals and/or biomass.

This might mean that the four CTs are modified, or even abandoned, in favour of a profiling system that uses specific image analysis based on morphology rules to spot important changes in the pellet shape across the temperature range.

Since the profiles act as a fingerprint for a specific fuel supply, the comparison of the AAFT should also allow unexpected shipment-to-shipment variations to be identified.

Significant advances with hardware have been made recently using better, higher-resolution digital imaging, faster image processing and with better illumination of the samples in the furnace. This has been a step forward for both coal and biomass ash analysis.

Advances in software have led to a new form of software that can process hundreds to thousands of images automatically to provide shape data across the temperature range of the test.

There is significant potential to make new rules for identifying characteristic changes in pellet shape to predict boiler performance. The BF2RA project will work with end-users to try and create a fully automated system capable of predicting slagging and fouling issues in advance of a coal being bought on the spot market.

Edited by Harleigh Hobbs This article first appeared in the February 2016 issue of World Coal.

Read the article online at: https://www.worldcoal.com/special-reports/08022016/the-future-of-ash-fusion-analysis-189/