The West Virginia coal mining industry is currently six years into a downturn in production. During this time period, coal production in the state has declined by 28% from 168 million t in 2008 to just 122 million t today. Along with that drop in production, direct coal mining employment has fallen from approximately 23 000 to just 16 000 today. The workforce reductions have translated into declines in state payrolls – with direct payrolls dropping from US$1.66 billion to US$1.15 billion.

Taking the assumption that one coal-industry job supports five in the wider economy (established in 2010 by a joint study of the industry by West Virginia University and Marshall University), it can be projected that the decline in direct employment led to a further decline of 35 000 support jobs. Using the state’s average per capita wage of US$38 000, this decline in support jobs has resulted in a further loss of US$1.33 billion – or a total of US$2.48 billion.

This reality is visible in recent unemployment reports from Workforce West Virginia and the Department of Commerce. While the state’s overall unemployment rate is approximately 6.7%, most of the large coal-producing counties are reporting unemployment rates of greater than 11%, with Mingo County and McDowell County reporting the highest rates of 13.3% and 15.3% respectively.

Causes for the recent downturn

The decline of the state’s coal industry can be attributed to one primary factor: the federal regulatory assault known as the Obama War on Coal. The direct impact of this regulatory assault has come with the shuttering of hundreds of coal-fired power plants across the country, with many of the closures coming in areas traditionally served by West Virginia coal (see map below). Each of the dots on the map indicates power plants closed or to be closed as a result of the administration’s regulatory assault on coal. (Note: The larger the circle, the more kWh of electricity production is being retired). 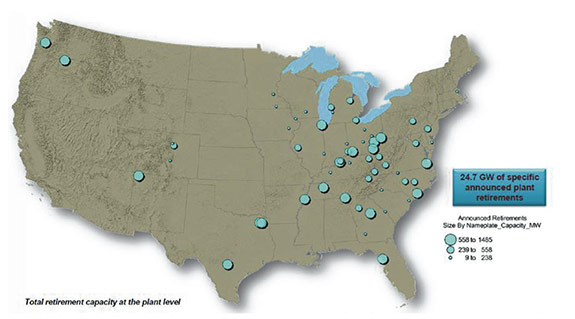 It is important to note that West Virginia’s metallurgical coal is the best quality in the world and there is no real replacement for coal in the steelmaking process, so that portion of the state’s coal market is secure except for the normal cyclical economic factors that are being experienced today with the ongoing sluggishness of the world economy.

While the impact of regulations being imposed by the Obama Administration are the primary cause of the decline in West Virginia coal production, there are several other factors that are exacerbating the current downturn. These factors include:

Looking at the relative prices of coal from the various domestic producing regions provides a picture of the challenge faced by West Virginia’s coal industry (see table below). It must reduce costs sufficiently to bring its market price down to a level competitive with its primary rival – Illinois Basin coal – in order to protect, as much as possible, its share of the thermal coal marketplace. This would essentially require a 19% reduction in the cost of production. How can this be accomplished?

Clearly productivity can be improved. Since 2008, productivity in West Virginia has dropped by 24%. Therefore, the industry must reclaim most of that loss in order to compete.

Another source of savings is decreasing the tax burden on the state’s coal producers. One place to start is to repeal the 56 cents/short t special severance tax that has helped the state retire the worker’s compensation debt. The debt will be repaid later this year and it is time to restore that money to the industry that worked as a partner with the state to solve its debt crises.

Third, the state can reduce the property taxes charged to coal companies. Currently, coal producers pay exorbitantly high rates of property taxes on both producing and non-producing properties. Reduction of property taxes should be a major part of the broader discussion of tax reform as the state moves toward the 2016 legislative session.

Lastly, the state could look at ways to reduce the cost of transport of West Virginia coal to market – through investments in port facilities, rail rate reductions or improvements to truck transport routes. In essence, none of these options can be seen in isolation, each of them in some combination will likely be required to improve the state’s competitive position in the coal marketplace.

About the author: T.L. Headley is a consultant working in West Virginia’s coal industry.

The is an abridged version of the article “The view of the mountain state”, which first appeared in the July issue of World Coal. Subscribers can login and download the issue here.

Read the article online at: https://www.worldcoal.com/special-reports/07072015/west-virginia-the-view-from-the-mountain-state-2521/