Water is a fundamental and valuable resource for life as well as in industry. Within mining operations, it is used in a broad range of activities, including mineral processing, dust suppression and slurry transportation. Over the last few years, responsible mine operators have made considerable progress in reducing water usage as part of their environmental commitments.

Aside from the environmental considerations, water is becoming increasingly scarce and more expensive. Set against this is the fact that mining operations use a large quantity of water during mining and extraction processes. Accurate water-balance planning over the life of the mine, and reduction of overall water consumption, are therefore critical to a mine’s success as a business.

Planning, sourcing, permitting, pumping, tracking, reporting and disposing of process water consumes a significant portion of a mine’s operating budget, especially those based in the world’s most arid regions. Reducing or eliminating water consumption from any part of the process therefore has the ability to transform the environmental footprint and financial performance of a company.

This is not an easy challenge, as the mining industry is one of the most arduous and demanding industries for rotating equipment maintenance. Not only must it deal with abrasive and corrosive applications, but it has to accommodate historical run-to-failure maintenance practices and the difficulty of operating in harsh, remote locations.

A common mining industry misconception is that the only way to achieve a reliable seal on these tough pumping applications is by using gland packing (Figure 1). Unfortunately, gland packing goes hand in hand with high water consumption, high maintenance costs, poor availability of equipment and large production losses. As a result, mechanical seals were introduced to mines a few decades ago. However, end-users were not adequately trained and for years have been supplied with the incorrect type of seals, poor choice of materials, and wrong – or, in some cases, no – seal support systems. This contributed to the general misconception that mechanical seals do not work in the mining industry. 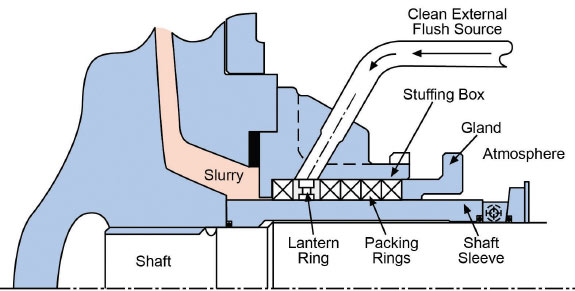 Figure 1: Typical arrangement of gland packing in a pump.

Not only do mechanical seals work, but they also are collectively eliminating billions of gallons of wasted gland water each year, while simultaneously improving the meantime between repairs (MTBR) of the pumps. Thousands of double mechanical seals are now operating successfully around the globe in some of the most remote and difficult coal, phosphate, platinum, gold, potash, copper and other mineral extraction operations.

Gland packing has been the traditional method of sealing pumps for more than 100 yr. This type of packing is generally available, relatively low-cost per unit and most mechanics are familiar with its use. However, there are some inherent drawbacks to packing:

The key to successful sealing is to maintain a cool, clean and stable fluid film between the faces. When a single mechanical seal is used, the liquid being pumped (the pumpage) becomes the fluid film. This works fine when the pumpage is a clean liquid, such as water. However, when the pumpage is slurry, the abrasive nature of the slurry can quickly damage the seal faces and result in component failure.

A single mechanical seal incorporates two flat faces – one stationary and one rotating – running against each other with a fluid film between them providing lubrication. Without a stable fluid film between the faces, they would be in full contact, known as ‘dry running’, which would lead to rapid heat buildup and component failure.

In this case, an external flush of clean liquid, typically water, can be injected on the process side of the single seal to force the slurry away, and surround the seal faces with a cool, clean liquid. The primary drawback of this arrangement, known as API Plan 32, is that the injection of water into the process is at a higher pressure than the stuffing box pressure.

This is problematic on tailings pumps in series, where the final discharge pressure can reach several hundred pounds per square inch (psi), and special pump systems must be installed and maintained just to supply this high-pressure flush water.

All of the drawbacks of both gland packing and single seals described above can be eliminated with a correctly specified double mechanical seal and support system. A double seal has two sets of faces: one set sealing to the process fluid and one set sealing to the atmosphere, with a barrier region in between the faces (Figure 2). 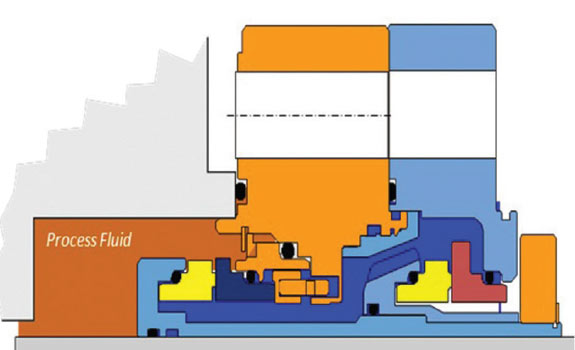 A properly designed seal support system (tank or ‘seal pot’, Figure 3) supplies a clean, cool liquid – usually water – to the barrier space between the seals at a higher pressure than the process fluid in the pump. Thus, there is a pressure differential, which forces the clean barrier fluid across the faces, forming a stable fluid film.

As the mechanical seal faces generate heat, the hot water in the barrier zone of the seal rises to the tank. The tank radiates heat to the atmosphere and the cooler, denser water sinks back down to the seal. This process is known as a ‘thermosiphon’, and it enables the tank to provide the mechanical seal with a constant supply of fresh, cool, clean, pressurised water for the fluid film, with no moving parts.

In addition to maintaining a stable fluid film on the seal faces, it is useful to control the design of the seal chamber to promote maximum seal life. Many slurry pumps utilise an open-throat seal chamber (Figure 4). This design can lead to erosion of the seal gland caused by the velocity of the slurry around the seal. 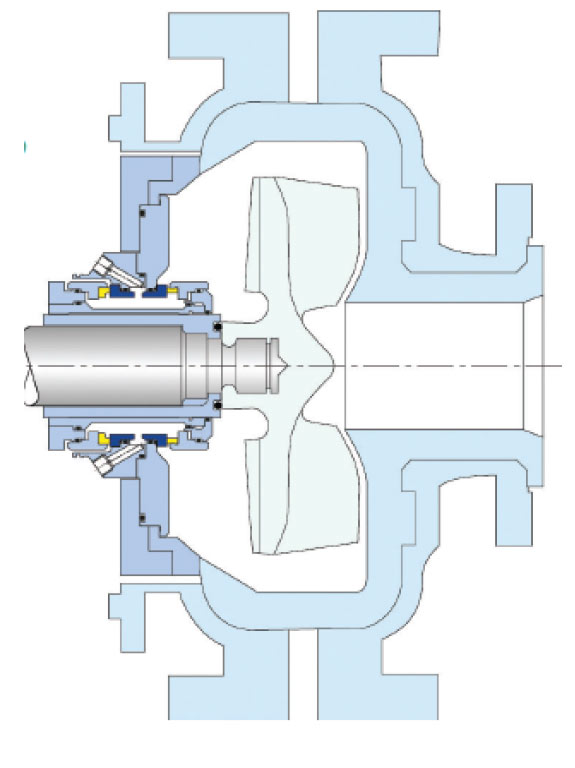 Figure 4: Diagram of a conventional ‘open throat seal chamber’, which exposes the seal to the full velocity of the slurry.

The conventional remedy is to use flow modifiers (ridges or ‘speed bumps’) machined into the ID of the seal chamber. A better seal chamber design is shown in Figure 5, where the slurry velocity is interrupted by the closed frame plate between the impeller and the seal chamber. There is still a large cavity around the seal, which promotes the flow of liquid to cool the seal. 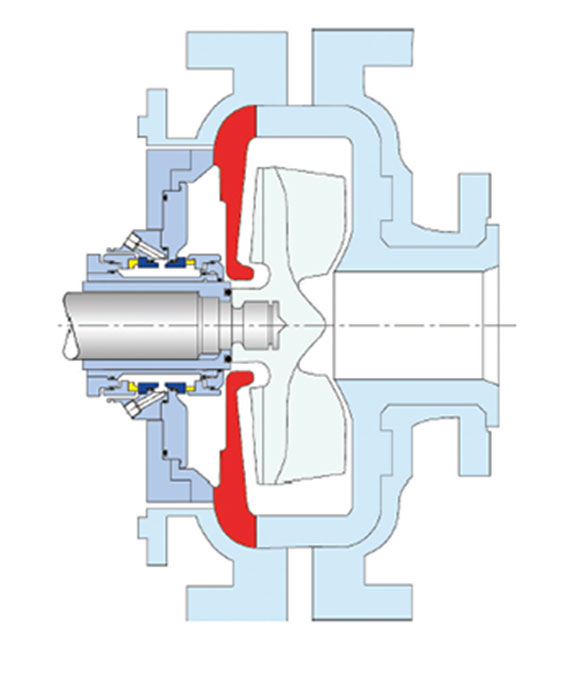 Figure 5: Alternate ‘closed frame plate’ pump design, which hides the seal from the full velocity of the slurry, thus reducing the need for expensive, exotic metallurgy for the seal components.

In a modified API Plan 53A, each mechanical seal has its own support tank with a pressure regulator to provide clean barrier water at the appropriate pressure for each pump. Each tank is fitted with a non-return valve so that reverse-contamination of the plant water system is not possible. Even if the plant water pressure should fail for a short time, the non-return valves keep each tank at the proper pressure so as to maintain the important fluid film.

A well-engineered solution will cut seal water consumption per pump from an estimated six million gal./y of water with a traditional flushed seal or packing, to less than 10 gal./y, for a 99.999% reduction in seal water usage.

It is generally accepted that packing has several drawbacks when used to seal rotating shafts on pumps. Perhaps the biggest of these is the requirement for millions of gallons of gland water per pump per year, for cooling and lubricating the packing.

Double mechanical seals and tank systems eliminate all the problems associated with packing and can greatly reduce a mine’s water footprint. At the same time, it reduces the manpower required to care for the packing and increases the uptime and availability of the equipment. In those cases where the process is sensitive to dilution, double mechanical seals can save millions of dollars per year in lost product.

Not just any mechanical seal arrangement will accomplish the above goals, however. The pump owner must: (a) select a robust double mechanical seal; (b) ‘hide’ the seal from the slurry with a closed frame plate liner; and (c) maintain a clean, stable fluid film across the seal faces. This clean fluid film is accomplished by using a self-filling, maintenance-free tank support system that maintains the seal barrier fluid pressure at 15 – 30 psi over the pump fluid pressure.

Thousands of AESSEAL® double mechanical seals and tank systems are in operation worldwide in mining and other industries, with a total estimated saving of more than 25 billion gal./y of water, which is proving to be better for both businesses and the environment.

About the author: Chris Rehmann is the Marketing Manager at AESSEAL Inc.

Read the article online at: https://www.worldcoal.com/special-reports/02092015/reducing-mine-water-usage-2801/