When Dome Technology CEO Bradley Bateman met with China Coal management, it was clear what the company wanted: a high live-reclaim system at an economical price – and good looks did not hurt either.

China Coal sought storage facilities for both its Hulusu and Menkeqing coal mines, located 15 miles apart in north China’s Inner Mongolia Province. Based on the ability to keep outside moisture out, Bateman said a series of domes was a more economical solution than traditional silos. And in the land of the yurt, another factor “was the aesthetics; it was the way they look,” he said.

Today, visitors to one mine will see three identical domes housing 60 000 t of coal apiece and in the distance three more identical domes at the other mine. But what visitors will not see is an innovative material-handling system inside the domes that gives China Coal what it wanted most: the ability to move product – and move it fast. 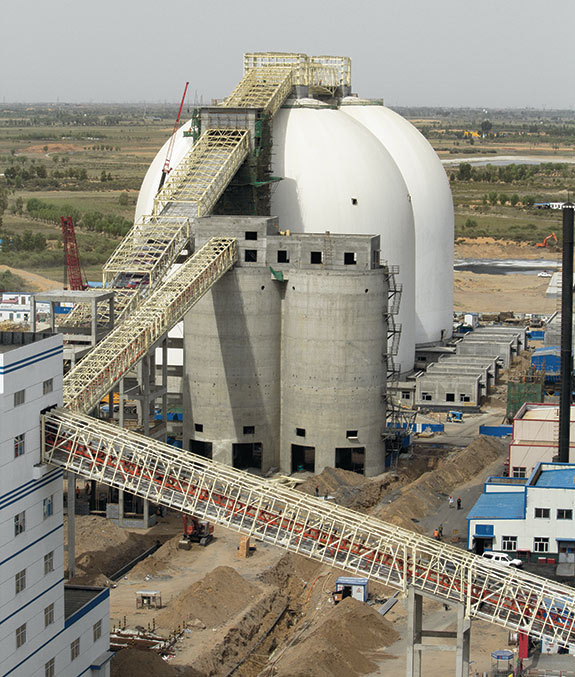 As more and more Chinese citizens plug in their phones and electronic devices everyday, power companies are relying on and demanding coal as an energy-source generator at power plants. And China Coal is ready to sell.

“[China] is an emerging country and they have an energy shortage – that’s why companies like this are developing in this region,” Bateman said.

Careful planning was the first step for the project, beginning with storage size. Domes made more storage possible within a smaller footprint, so China Coal could store more product in a smaller footprint than warehouses and flat storage, stacking it deeper and taking up less valuable property at the sites. While common for businesses to require three to five flat-storage buildings, one dome often accommodates the same amount of material in one structure. The double curvature of a dome lends itself to strength and the ability to build up, rather than out.

The storage space available on a relatively small piece of land was one of the most significant dome advantages, explained Zhao Jiapeng of China Coal. But solutions for issues, such as dust production, spontaneous combustion and explosion, required attention if the project were to be successful.

For companies planning a coal-storage facility, Engineer for Dome Technology, Adam Aagard, said much of the discussions up front should centre on fire protection, environmental protection and desired reclaim rate. Here, these important considerations are explained, with details on why specific features were chosen.

According to Zhao, the possibility of coal self-igniting in the dome was one of China Coal’s main concerns. Coal’s volatile nature causes it to self-heat, easily ignite and produce flammable coal dust from something as simple as equipment vibrations. These features promised protection:

Thanks to a dome’s PVC membrane and layer of insulation, stored coal maintains its calorific value by keeping dry. The dome’s insulated nature also prevents heating and cooling of the walls and air inside, thus thwarting condensation that could contribute to spontaneous combustion.

Fire-protection experts recommend coal be stored in facilities with few surface areas for dust to collect. Since domes are built without the use of interior supports, there is no worry about dangerous dust build-up on trusses. Secondary explosions – the kind caused when initial explosions shake loose accumulated coal dust – are less likely because the support-free domes have no ledges for dust to build up.

The domes’ design allowed the company to render the pile of coal inert by sealing the top and bottom to cut off oxygen sources and by pumping nitrogen to lower the oxygen level.

With a thermal scanner over the belt on the inbound receiving side, infrared cameras check temperatures on coal, while on the belt, to make sure no off-spec product enters the dome.

A linear heat cable monitors for fire on the belt, also examining bearings in case one is throwing sparks; this cable might detect a fire travelling along the belt length before it reaches the thermal scanner. A product unique to combustion-prone materials, the system shuts down conveyance and alerts facility management of the fire. Depending on the setup, workers can either extinguish the fire or an existing fire-suppression system takes care of the problem. 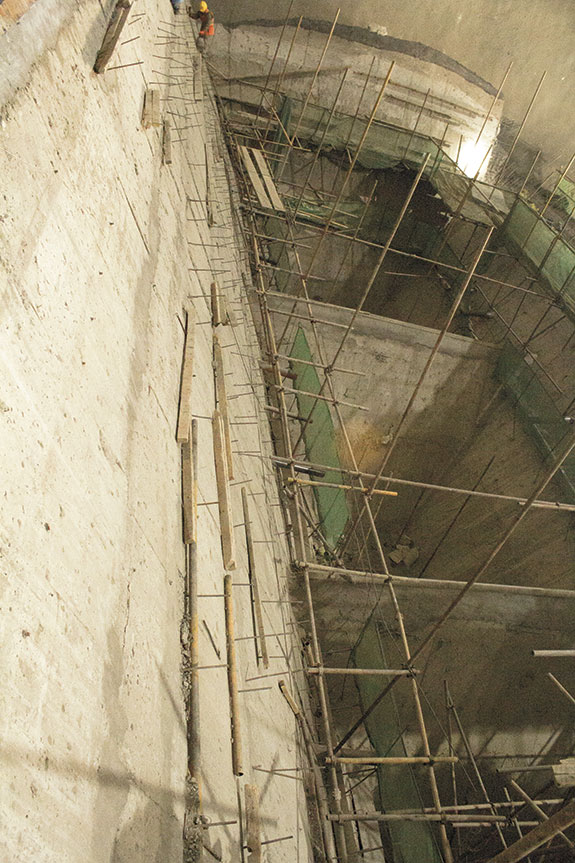 The floor of the domes while under construction; the finished product yields 100% live reclaim.

Material handling in a hurry

How fast and how well a company moves product will translate into how fast it makes money. So selecting the right reclaim and handling systems – not just those moving product within the structure – as well as loading and reclaim systems were key for China Coal’s future financial success.

Inside the domes in China, a full hopper system similar to a series of funnels situated side by side allows coal to flow through the structure under its own weight rather than by loader. “Inside this dome it’s a 100% live-reclaim system, which is not new to the industry, but on this magnitude, it’s pretty new,” Bateman said, adding that this design allows each dome to be completely emptied every three days, which met China Coal’s throughput needs. Especially for the lower-volatility coal that is stored in these domes, this model is ideal because the coal’s shelf life is long enough to be safely stored in that scenario.

At each of the two sites, Dome One, located closest to the mine, houses coal arriving fresh from the mine. It stays here until it exits the dome, passing through a cleaning and washing process before being milled to achieve the right-sized pieces. From there coal is dumped via conveyor into Domes Two and Three, where it later exits the structures in one of three tunnels and is transported to trains waiting just outside.

An environmentally conscious approach to storage

Coal dust demands attention because it is a pollutant. The dome is an effective vessel for mitigating dust concerns because it is seamless and airtight – and that yields air protection. Since no rain can enter the structure, it will not mix with dust and cannot be leeched into ground water either.

To collect dust is essential; it reduces the risk of combustion, and it helps companies meet environmental regulations. A Chinese vendor installed the dust-collection system for the China Coal domes. The following are a few common options for dealing with dust:

A spray-down system literally sprays coal with water to wet the dust, preventing it from becoming airborne. Because water decreases coal’s useful BTU value, this system is not popular. One variation is to spray oil onto coal instead of water; the dust is still managed, but the useful BTU values are not reduced – though companies will have to assign a portion of the budget to purchasing mineral or vegetable oil.

A baghouse system sucks in air and pulls particulates through a fabric filter. Because it is a dry system collecting dust and storing it in high concentration, the chance of combustion within the system is still real.

Regardless of the type of dust collection, an automatic system can be installed to convey dust away – whether pneumatically or on a belt – to a combuster. Another option is for dust to be collected in a bin or super sack and hauled away.

Thoughtfully planning a storage and material-handling facility provides peace of mind in operation. But it also has allowed China Coal to process its product faster today. Production moves at a rate comparable to the one Dome Technology set during the engineering and construction process, which lasted just 18 months. “It was a fast-paced schedule – very aggressive – and we met their deadlines,” Bateman said.

The project was completed in August 2015, a true joint effort between China Coal and Dome Technology. “The achievement from the Menkeqing and Hulusu projects belongs to both of our corporations,” Zhao said.

Written by Rebecca Pyper, Dome Technology, USA. Edited by Harleigh Hobbs. This article first appeared in Dry Bulk Spring. To read this and much more, register to receive a copy of the issue here.