This insight focuses on how the Chinese coke sector is suffering under low demand and overcapacity. Coke prices are currently below the costs of production of standard quality coke and this situation cannot be sustained.

As a result, coke producers are considering all options to reduce costs. Using higher proportions of semi-soft coking coals and increasing heating time has been sufficient up to now. However, continued price pressure has begun to impact coke quality.

Therefore, we expect a reaction in the coke sector in China, similar to that currently being seen in the steel sector, whereby some capacity closures will allow the coke price to rise, to at least match costs of production.

How did capacity become so unbalanced?

During the boom years, the Chinese steel industry expanded to meet insatiable demand, developing a large number of integrated coking mills. Concurrently, a large merchant metallurgical coke capacity emerged, which could rival the total capacity of other countries in its own right.

Cheaper coal passes on to the coke price

Based on CRU’s research, it is estimated that around 90% of exported Chinese metallurgical coke is produced in Shanxi province, the biggest metallurgical coal producing province. Merchant coking plants here have minimal transport cost for the delivery of the coking coal feedstock. Chinese coke producers may also be able to pay below market price for local coals, as coal producers have looked to clear mine stockpiles. Both of these factors offer major cost savings for merchant coke producers in the province.

Coking mills pulling out all stops to lower cost

As the Chinese domestic and export prices have fallen, coking plant operators have had to find new ways to cut costs. In this regard, CRU’s investigations indicate that coke plants are actively operating at increasingly lower coking coal stocks (e.g. some are reported to be operating with less than 10 days on hand of coal), knowing that they can purchase coal at lower prices when restocking. Further helping to reduce cost is the significant amount of excess capacity in the Chinese merchant metallurgical coke sector.

As domestic demand has ebbed, metallurgical coke producers have been able to increase heating periods that, combined with installed technologies, such as stamp charging, has allowed higher proportions of semi-soft and cheaper, lower-quality, metallurgical coals to be used in the blend, significantly reducing procurement costs, while maintaining CSR levels. However, under the current, very difficult, market conditions, it appears that coke producers are becoming over-eager to reduce procurement costs in order to maintain sales. As a result, Chinese metallurgical coke prices have been quoted at US$136/t, CFR India East coast. But problems are starting to arise.

Coke quality is becoming a problem

In India, 5% of total metallurgical coke consumed is sourced from China. However, in September, CRU understands that several cargoes of Chinese metallurgical coke were refused by buyers in India, as the ash content was above agreed specifications, and, in November, concerns over quality again came to the fore. These issues around the quality of imported cargoes have injected caution into ongoing trades and highlight the downside risk of third-party purchases in such a competitive market. At seemingly unsustainable prices, it is becoming more common that metallurgical coke cargoes are below the specified quality parameters.

Metallurgical coke shipments are already quality checked when loading at the port in China, but Indian buyers now want further sampling to be performed once the metallurgical coke has landed in India and before payment and receivership is confirmed. The negotiation of additional checks highlights the fact that Indian buyers are suspicious of the quality of some of the cargoes being delivered.

Turning point of the market?

These developments may be critical for the metallurgical coke price. Previously, Chinese merchant coke plants were able to maintain the quality of product when using lower-quality metallurgical coals and be able to sell coke at a price that covered costs of production.

Today, it appears that coke producers are increasingly desperate and feel they have to resort to lower-quality coal blends to maintain low costs. This has dragged down the export price, but quality is being impacted in a manner that is not acceptable to the market. Cost is important, but iron makers will not put blastfurnace operations at risk at any cost and there is a minimum acceptable standard for the coke that is used. To illustrate the situation, the below graph sets out our estimations for the cost to a merchant Chinese producer of producing coke with acceptable quality characteristics, taking into account coal blend. This cost is above today's export price. 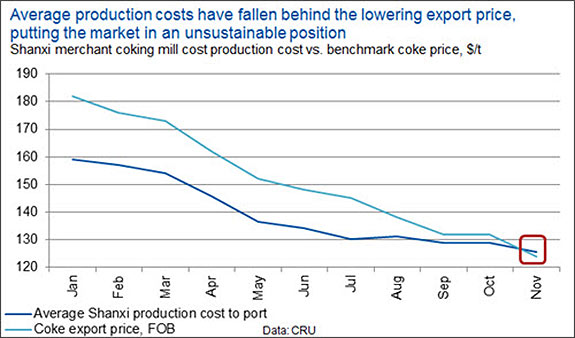 This suggests that the current situation is not sustainable and, unless demand for material improves, which CRU is not forecasting, CRU believes there is likely to be some exits in supply in the Chinese coke sector that should allow coke prices to rise to match cost of production.

Read the article online at: https://www.worldcoal.com/special-reports/01012016/coal-news-coke-news-coke-market-metallurgical-coal-news-cru/