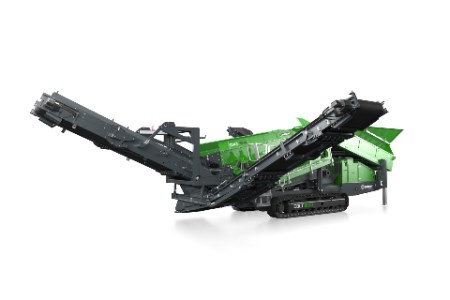 The Colt 1600 has been in secret development for some time, with the first machines scheduled for production in the coming months.

The Colt 1600 will be the largest screen in the EvoQuip range, capable of processing up to 600 tph depending on application. With a high capacity incline apron feeder as standard, the machine has been tested in heavy duty applications.

The Colt 1600 is available with Hybrid technology giving the flexibility to be powered by an external power supply or the standard on-board engine.

As with the Colt 1000, the standard configuration discharges the fines product to the right side of the plant, with the mid-grade on the left. Both conveyors can be ordered reversed, with the ability to place both conveyors on the same side of the unit once the Colt 1600 reaches the field.

Two-way split conversion is possible by relocating the tail conveyor to collect both top and bottom deck pieces. There is also the option of telescopic conveyors.

The T-Link telemetry system provides the customer with real-time information on the performance of their machine. Also available is the OMNI by Terex cab-led machine control system launched in 2019.

Read the article online at: https://www.worldcoal.com/product-news/27112019/new-colt-1600-screen-announced-by-evoquip/