While the number of mine worker fatalities has been trending downward for the past 25 years – reaching a low of about 40 in 20141 – the proportion of accidents involving mine machinery and mobile equipment has continued to cause concern.

Safety authorities have long voiced uneasiness about the interaction of workers and machinery and with the number of accidents classified as ‘struck-by’ or ‘caught-in’. These include workers entangled in rotating machinery, struck by moving machine components or run over by mobile equipment. Such accidents, including non-fatal, can have severe repercussions in terms of their personal impact, the number of industry hours lost and the amount of downtime caused.

One major response of the industry has been to ensure that only properly trained and safety-aware people are authorised to operate mobile and fixed machinery. Mine owners have introduced various access control systems to try to ensure that only qualified people operate or work around particular types of machinery. Others are electronically locked out of controlling such a system or denied entry within a set perimeter around such plant.

The problems with this approach can be:

“Achieving a safety culture is a major objective in mining, especially when developing a culture of commitment to safety across a workforce. You can give all the lectures and provide all the protective measures you like, but it will fall down unless equipment operators are committed to a shared culture of responsibility that ensures the correct use of high-risk, high-value plant equipment,” explained access control authority Joel Phelps.

Phelps is responsible for the introduction throughout North America of an innovative, inexpensive and easily applied access control system: AccessPoint from Whiting Passport.

The system is purpose-built to boost occupational health and safety (OHS) and cut business risk associated with hundreds of billions of dollars worth of industrial equipment used by major industries such as mining.

Whiting Corp. – which is recognised throughout industry as a leading safety authority on cranes – has expanded its expertise with the introduction of the AccessPoint access control system, which uses smart card technology to control access to a huge variety of mobile and fixed plant equipment used by surface and underground mining.

While smart card technology is increasingly used across industry, AccessPoint is radically different from typical access control systems, which are designed to prohibit use by merely restricting perimeter access.

“Not only do these traditional systems need expensive communications infrastructure to work (between the control point and a backend computer), but also once people have passed security, there is typically nothing to actually stop them from operating any individual machine they can get their hands on. So they are OK as far as they go, but comparatively limited when compared with the new generation technology represented by AccessPoint,” said Phelps, who is Whiting Passport Product Manager for Whiting Corp.. The system is engineered for individual items fixed and mobile plant and for general use across an organisation.

“For individual items of the plant, AccessPoint is fitted to the actual device you want to manage. So it will only operate for individual persons that have been authorised to do so and only for the period that this authority is valid. Machines will simply not start for anyone else.”

HSE cultural change uou can buy off the shelf

“Controlling devices individually also enables us to tackle the difficult part of the HSE equation: the people part. This is the bit that is typically ignored because, let's face it, changing people's behavior is really hard – and maintaining it is harder still.”

“AccessPoint logs authorised use and thus achieves behavioural change by merely providing the means by which people can be held accountable. This change will often stay with the operator when they then use other equipment. It's cultural change you can buy off the shelf.”

“Also, because it doesn't need to rely on a network to operate, it can be installed quickly and inexpensively on a wider range of equipment. With AccessPoint, you can finally control access to mobile and battery powered equipment that isn't bolted down and can easily wander in and out of Wi-Fi or 3G range,” said Phelps.

This unique feature has allowed AccessPoint to become a universal solution for all types, makes and models of equipment. Organisations are now able to employ a single access control technology across their entire operation, with only one associated management system.

The system has been applied to both surface and underground applications, where it has most recently been used on underground cranes and remote control drilling machines. It can also replace most logbook-controlled cabinets or rooms by fitting an AccessPack to an electronic safe or door.

The system consists of a ‘control puck’ (sensor assembly containing an RFID reader and other smart electronics – see Figure 1) is fitted to the machine and programmed with relevant information about the machine and its location. 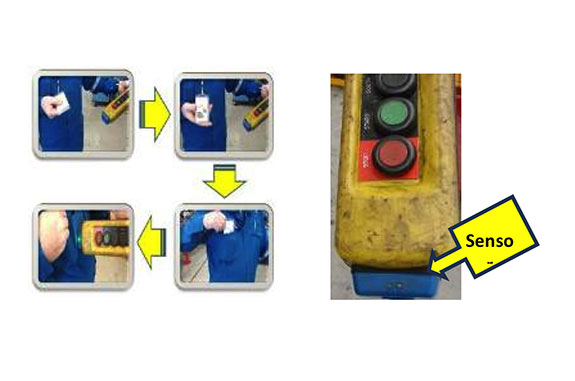 Machines will work only when the user swipes the puck with a valid RFID card (Figure 2). As soon as the logged-in user finishes using the equipment, smart sensors and electronics within the AccessPoint detect this event and he/she is automatically logged out to prevent usage by unauthorised personnel. 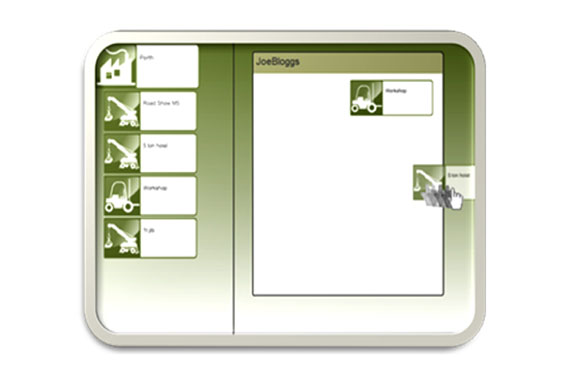 RFID cards are programmed with ‘tokens’ for each respective piece/type of equipment that a particular operator can use, based on the person’s inductions/training/certifications and associated expiry dates.

Unlike traditional access control hardware that relies on communication between the access control point and a central management computer running a database of permissions, AccessPoint is a standalone system with all the information required to grant/deny access being contained on the user’s RFID card. This is the key to its wide applicability and cheap installation.

AccessPoint delivers behavioural change in a little blue puck, said Joel Phelps: “Users can remain in compliance with OHSA and other regulatory standards because AccessPoint gives them the ability to continuously view how their equipment is being used. Users can quickly address and correct misuse patterns. AccessPoint creates a true culture of accountability with a simple solution that holds employees responsible for their actions with the high-risk, high-value equipment, while also denying non-licensed users access.”

AccessPoint for fixed equipment can be fitted to any electrically powered device, extending from cranes, lifting and positioning machinery through to materials handling and processing technology.

AccessPoint for vehicles can be fitted to any on-road or off-road vehicle with an on-off button, extending from huge tracked vehicles, trucks and civil engineering machinery, though to smaller forklifts, diggers, road trucks and implements.

“Each AccessPoint system is customised to the company’s specific needs,” said Joel Phelps. “Each administrator has the power to store start and stop times, track certification and expiration statuses and set customised re-certification intervals on a per user basis, as they see fit.”

“Administrators can remain in compliance with OHSA and other regulatory standards because AccessPoint gives them the ability to continuously view how their equipment is being used. Users can quickly address and correct misuse patterns.”

Administrators can view run hours of all AccessPoint devices within range from any bluetooth device, or they can log into their own personal dashboard – or Viewport – from their PC to view usage statistics of all AccessPoint devices. Underground information can be accessed after the completion of work cycles where it is not accessible by bluetooth.

Whiting Passport dealers provide real-time support to assist with installation and setup and to answer customer questions. A full range of kits are available, depending on the type of equipment.

There is also no limitation to the number of units or different equipment types on a site. Most importantly however, the hardware is simple and hassle-free to use. After you fit an AccessPoint to a machine, the operator just replaces pressing a start-switch with swiping a card. “Thus we don't get much push back from users," said Phelps.

The system also prevents unqualified personnel from being pressured into using hazardous equipment by over-eager or time-stressed supervisors: “So it's win-win for everyone. Administration is simple. A secure web interface enables access rights to be granted or changed using a few drag and drop actions.”

1. Preliminary data released by the US Department of Labor’s Mine Safety and Health Administration indicates that 40 miners died in work-related accidents at the nation’s mines in 2014, two fewer than in the previous year. Coal mining deaths dropped from 20 in 2013 to 16 in 2014, the lowest annual number of coal mining deaths ever recorded in the US. The previous record low was 18 in 2009.

Read the article online at: https://www.worldcoal.com/product-news/26032015/accesspoint-from-whiting-passport-coal2117/