In 2011, the owners of Castle Resources, which purchased the Granduc copper mine in northern British Columbia, Canada, were looking for a wastewater treatment solution. A tunnel expansion project was necessary to develop the mine, so a 25-person work camp had been established nearby. Initially, workers were digging open-pit latrines in the rocky soils to meet their wastewater needs. These latrines were covered with an enclosure; as each latrine filled, a new one was dug and the enclosure was moved. This stopgap solution was primitive and uncomfortable. However, due to the rough terrain and remote location, finding a better solution would be difficult. 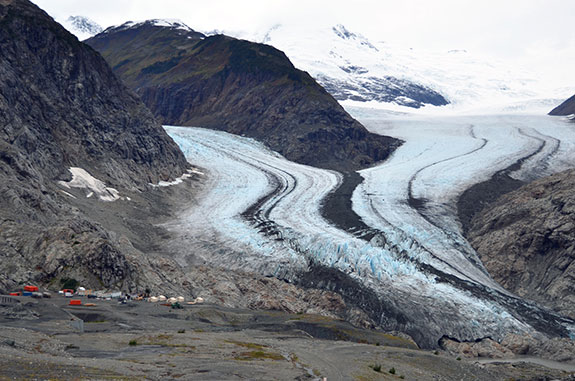 The camp needed a portable system that would not only provide excellent wastewater treatment for the environmentally sensitive area, but could also withstand the harsh conditions there. The system needed to have low operation and maintenance (O&M) requirements and meet permit limits of 30/30 mg/l BOD and TSS.

Castle Resources contacted a local engineer with its requirements. Eerik Lilles, P.E., owner of Wildernest Systems (a wastewater company), suggested an Orenco AdvanTex® AX-Mobile Treatment System because these robust units work well in extreme conditions, are easy to ship and set and have low O&M needs. AdvanTex systems use an engineered textile media inside a watertight fiberglass tank to treat wastewater that meets stringent regulatory requirements. AdvanTex is configured like a recirculating sand filter – a packed-bed filter technology that Orenco engineers have helped to perfect since the 1970s. 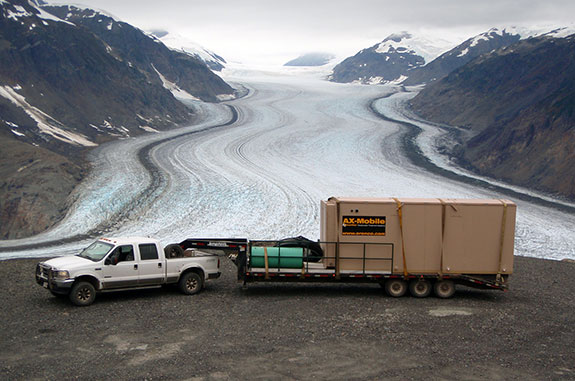 The packaged wastewater treatment plant for Castle Resources' work camp in B.C. was transported by barge and truck to the site, which is adjacent to Knipple Glacier. Photo: Wildernest Systems Inc.

AX-Mobile systems are completely pre-packaged units: all treatment media, pumps and controls are included. Optional equipment for reducing solids or meeting more stringent permit limits (such as UV disinfection units) can also be pre-installed. Tanks range from 4.3 – 12.8 m(14 – 42 ft) long and can be installed as individual units, serving up to 250 people, or in multi-tank arrays serving 3000 people or more. AX-Mobile units are installed above-ground, so they can also be used temporarily and then relocated as needed.

Since the site was so remote, the 6.4 m (21 ft) AX-Mobile unit was transported to the work camp site via lorry, barge and pick-up truck with flatbed trailer. Lilles and Orenco technical staff supervised the start-up of the system, which operates as follows. 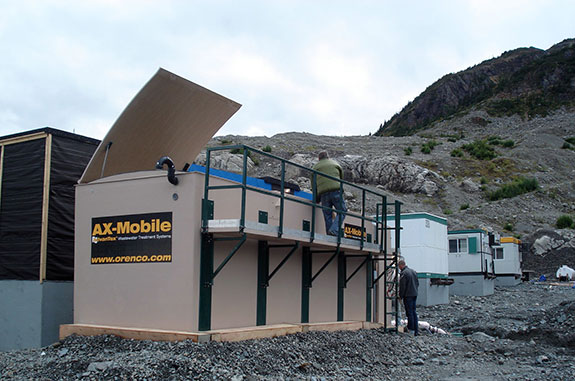 This AdvanTex® AX-Mobile Treatment System is a 6.4-m (21-ft) fiberglass unit that includes both primary and secondary treatment in a single module and serves 25 people. Photo: Orenco Systems Inc.

Sewage is pumped into the primary treatment area of the AX-Mobile unit. After passing through a Biotube® filter, effluent flows via gravity into the secondary treatment area. There, a high-head pump is used to distribute effluent over the textile media filter. Effluent is blended and recirculated several times before flowing to the discharge chamber. Treated effluent is then pumped through two parallel disinfection units pre-installed in a cabinet at the end of the AX-Mobile, and then discharged below the ground’s surface. The resulting effluent is clear and odourless. 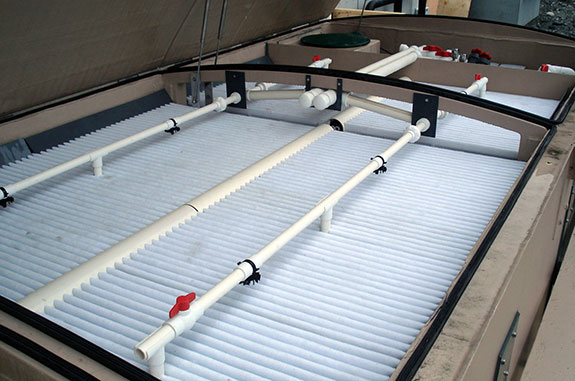 Secondary wastewater treatment for the camp is provided by a patented recirculating textile filter that is capable of meeting effluent discharge targets of 30/30 mg/L BOD5/TSS. Photo: Orenco Systems Inc.

An Orenco TCOM remote telemetry control panel, which was installed at the factory before shipment, both monitors and controls the system. TCOM panels are cost-effective, integrated telemetry panels that include digital control, data logging and remote access and control in real time. They are ideal for stand-alone monitoring and control systems or can be integrated into SCADA systems. The control panel is located in a cabinet adjacent to the UV disinfection units. TCOM units can be connected to a satellite or cellular network, landline, or Internet service to allow the system to be observed and adjusted remotely. 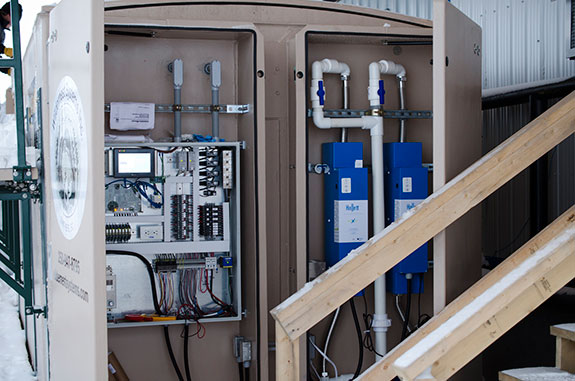 The AX-Mobile system was installed quickly and was operational eight weeks after initial contact was made. Effluent quality meets permit limits and the system requires little O&M oversight. This was the first AX-Mobile installation for engineer Lilles, who has since used the system in other mining installations. As he explained in the May/June issue of Industrial Water World: “With our first AX-Mobile installation, we realised the value of this product and all that it has to offer to this industry and other remote applications, as well as community applications.”

He continued: “With a more conventional approach – even if a conventional approach were possible – there would typically be little or no value to the system at the end of a job. Speaking from an engineering and sustainability angle, this is where we start to see product life-cycle considerations, which is a relatively new concept in the field of mining and exploration.”

Since 2009, Orenco’s mobile wastewater systems have been deployed in harsh environments and remote locales from Iraq to Alaska. And the company’s permanent wastewater solutions can be found in commercial and community applications all around the world.

About the author: Tristian Bounds is an R&D Engineer at Orenco Systems Inc. and Product Manager for the AX-Mobile.

Read the article online at: https://www.worldcoal.com/product-news/12022015/providing-effective-wastewater-treatment-at-a-remote-work-camp-in-british-colombia-coal1883/