Nestled in the shadow of the Kreuzberg, the second-highest peak in the Rhön Mountains of northern Bavaria, the small town of Bischofsheim seems an unlikely location to find groundbreaking innovation in the underground coal mining industry. But at the IBS Mining & Tunelling plant on the outskirts of the town, they are doing just that with the development of a new roadheading system with outburst management package (OMP) designed for gassy mines. 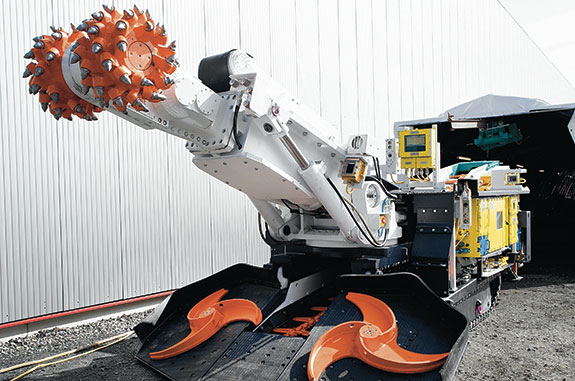 The new SM 150 OMP heading system was developed by IBS Mining and Tunnelling in collaboration with indurad, CFT, Sigma and Neuhäuser.

The new system was originally designed for Minera del Norte (MINOSA), a subsidiary of Mexican steelmaker, Altos Hornos de México S.A.B. de C.V. The company has long-running issues with gas outbursts at its Mine No. VII where the coal deposit can contain 8 – 18 m3/t of desorbed methane. Despite extensive efforts to control this, a number of accidents due to gas outbursts have occurred at the mine in recent years with management considering closure of the mine unless a safe system for driving roadways could be developed.

“Our people are our most valuable asset. With the serious risk of gas outbursts and the prevailing situation with coal prices we needed to develop a complete system that would enable them to operate in safety and be more productive,” said Rogelio Hernandez Cuevas, Technical Director, at MINOSA.

As an existing IBS customer – the mine has 20 IBS roadheaders already in operation – the German company took up the challenge. “We wanted to work with one major supplier for the complete system. We already have a large number of IBS roadheaders in use in our gateroad development so we were pleased they agreed to take on the lead role with a group of reputable partners,” continued Cuevas.

The solution was a truly collaborative effort, involving a newly designed roadheader, the SM 150, from IBS, with remote-control system from indurad, dust collection system from CFT, bridge belt conveyor from Sigma and pneumatic degasification drill from Neuhäuser. Together, the new system is known as the SM 150 OMP.

Key to the new system is the ability of the operator to control the machine from a remote cab up to 200 m away from the face, using a 3D graphical, radar and video imaging system, acoustic feedback, profile control system and electrical malfunction monitoring.

The SM 150 offers improved boom kinematics with a cutting height of 200 mm, cutting width of 600 mm for a total cutting area of 3 m2. The roadheader is also heavier (at 3 t) than previous models – but has a lower profile with a flat area on top that can be used as a working platform to install monorail, pipes, cables, arches etc.

The slewing turret has a redesigned flange connection to the frame, allowing the turret to be removed without disassembling the whole slewing unit, e.g. when moving the machine at the end of roadway development or during maintenance. This has also boosted the machine’s stability.

The loading table has also been redesigned to include independently driven star wheels, which reduces the power transmission required through the conveyor change. This allows the use of flat link chain for the conveyor, which makes use of a shuttle car easier with the new system. The new steel structure is also more robust, has more clearance to the tracks and improves access for maintenance.

Other changes include longer crawler tracks, lever-type stabilisers for greater horizontal control (allowing the roadheader to ‘dive’ to follow a dipping seam), more power (55 kW) and improved efficiency in the hydraulic power pack, and a switch to solenoid valves in the hydraulic controls, making remote control possible and improving monitoring and diagnostics. A closed-loop cooling system replaces the open-loop system on the existing model, ending the need for a water supply on the machine.

At the heart of the new system, however, is the new switchgear system, which was developed in house by the IBS electrical department. The system is ATEX certified by IBS and represents a first for underground mining, according to the company. It features:

Despite its initial development for the coal mines of Mexico, the system has a far broader market in gassy coal mines around the world. According to Bruce Field, Head of Sales – Mining and Tunelling at IBS, the mines of Eastern Europe are particularly interesting for the company – especially those in Poland, where the use of roadheaders is normally not allowed due to safety concerns, and the Czech Republic. Ukraine may also provide a potential market when the current political unrest in the east of the country – where most of the coal mines are located – comes to an end.

“We are extremely grateful for the ongoing loyalty and trust that MINOSA has placed in IBS, which has resulted in the development of this unique system,” said Dr René Nitsche, Managing Director of IBS. “Everybody at IBS has been motivated by the knowledge that this system makes mining possible in areas that would otherwise be too dangerous, thereby securing hundreds of jobs – especially in regions where mining is an important economic factor.”

Read the article online at: https://www.worldcoal.com/product-news/11052015/roadheading-in-safety-ibs-mining-and-tunnelling-coal2253/