At the end of 2012, SCHADE Lagertechnik received one of the largest orders in company history: for the new Formosa Heavy Industries steel mill at Ha Tinh in the Vietnamese province of the same name, a total of 21 machines were ordered. This construction site is the largest Greenfield project of the steel industry worldwide.

The delivery package by SCHADE contains two trippers for the coal-burning power plant and four trippers for the steel mill with a capacity of 5400 tph each. The customer will also receive six semi-portal scrapers with a track distance of 40.7 m (discharge performance: 2200 tph each). 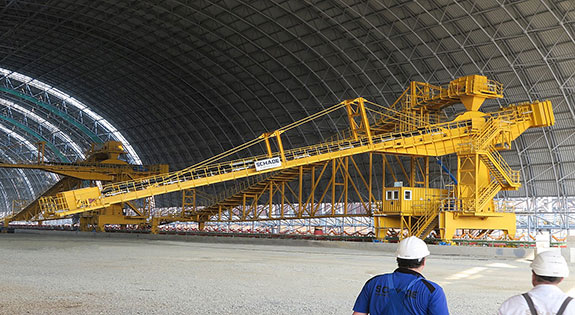 At the steel mill, a portal scraper with a track distance of 48.5 m (performance: 1200 tph) as well as two boom stackers with a performance of 360 tph and respectively 3,200 t/h will be deployed. The project will be rounded off by six rail-bound conveyor wagons for mobile discharge machines.

Read the article online at: https://www.worldcoal.com/product-news/08092015/schade-machineries-delivers-to-vietnamese-steel-mill-2827/