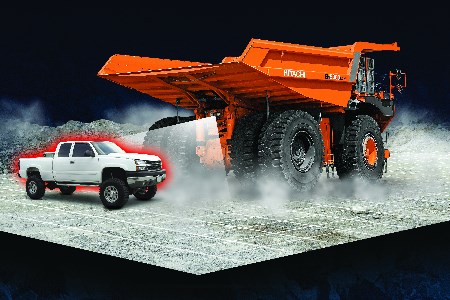 “As a fully integrated system, our autonomous haulage system is Hitachi to the Core,” said Craig Lamarque. Division Manager at Hitachi Construction Machinery. “It results in a truck that can determine the most efficient paths without constant communication with traffic control. We’ve also included components that make it possible to convert any Hitachi AC-3 truck bought today to AHS in the future.”

Hitachi’s trolley technology utilizes DC-powered overhead lines to power trucks up hills. When the truck operator connects to the line, the hauler switches to trolley power, resulting in an increase in speed up the grade vs. engine power alone. This increases productivity, lowers costs and reduces noise and diesel exhaust emissions.

The system consists of two parts – the infrastructure and the trolley-equipped AC-Drive haul trucks that have been configured for the system. Hitachi’s system is currently installed in 109 units worldwide and is available for all Hitachi AC-Drive trucks and is packaged entirely by Hitachi – from components to support.

In Stationary Mode, a warning is provided to the dump truck operator when the vehicle is stopped or starting to move, if any moving objects, such as other vehicles, are detected nearby. The warning is displayed in the driver's seat monitor with accompanying sound. Moving objects are recognised through images captured by cameras mounted on the front, rear, left and right sides of the dump truck. By quickly notifying the operator of any changes to the surrounding environment, the system contributes to improved operator awareness.

In Forward Mode, a warning is provided to the operator while driving, when approaching another vehicle on the road ahead. The approach warning is displayed in the driver’s seat monitor with accompanying sound. This mode uses millimeter wave radar, which is effective in poor visibility conditions such as rain, snow, fog or dust.

Two types of warnings are provided to the operator based on the radar data, according to factors such as the approach distance and relative speed of the object. Through these warnings, the system contributes to the operator’s awareness of the surroundings.

The Aerial Angle system is also being integrated into Hitachi’s driverless autonomous dump trucks that are currently in development.

Read the article online at: https://www.worldcoal.com/product-news/07102016/minexpo-2106-hitachi-introduces-truck-technology-solutions/