Voith has installed two TT Drives on the H2 belt conveyor in the Prosper-Haniel coal mine in Germany – without interrupting production and resulting in sustained coal reduction for the mine’s owner, RAG Deitsche Steinkohle.

The first TT Drive was installed in the mine to allow it to carry on using a heavily damaged steel cord belt (ST5000) until the next scheduled downtime. It was thus able to prevent an unplanned shutdown and corresponding production loss. 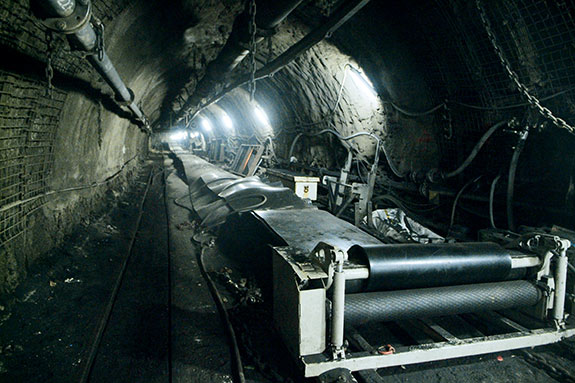 During the next downtime, Voith installed a second TT Drive in the H2 belt conveyor. This allowed for a further reduction in belt tension forces and Prosper-Haniel has since been able to operate the belt conveyor with a cost-saving textile belt (PVG2000/1).

Project Managers, Ralf Dohle and Wolfgang Kosiuk, from RAG Deutsche Steinkohle, are satisfied with Voith's project management and the booster drives: "Voith's solution has provided us with a dual benefit. Not only did we manage to avoid an unplanned shutdown because of the damaged belt, we are now able to use a textile belt instead of an expensive steel cord belt for the system. We would choose a solution from Voith again anytime."

The H2 belt conveyor transports the mined coal over 1270 m with a lift of 186 vertical meters. Its operating speed amounts to 3.2 meters per second with a capacity of 2000 tph.

The Voith TurboBelt TT Linear Booster Drive is a high-performance secondary drive for belt conveyors. It extends the use of belts in existing systems and increases their available power. In new belt conveyor systems, it reduces the requirements on belt quality, leading to considerable cost savings.

Voith Turbo, a Group Division of Voith GmbH, is a specialist in industrial drive solutions for industries including oil and gas, energy, mining and mechanical engineering, ship technology, and rail and commercial vehicles.