An Australian designed and manufactured remote-control belly plate lowering and elevating device for tracked vehicles is being introduced to the US after achieving outstanding success in its home market, Australia.

The Tracked Elevating Device (TED), which is now being introduced to the US by distributor Safety Mining Industrial Trade Suppliers (Safety MITS), eliminates the human element from the critical lowering stage underneath equipment by employing remote control of the lifting device to remove and lower belly plates and other heavy components. 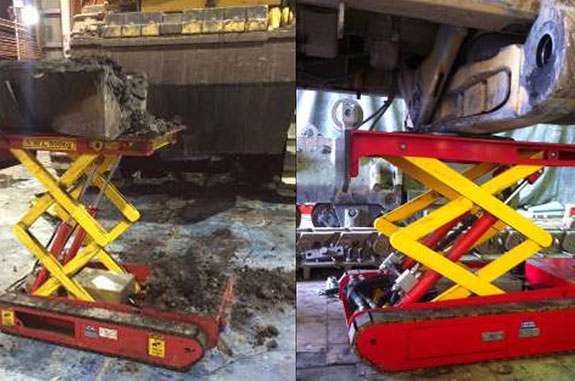 Removing belly plates from bulldozers and other tracked vehicles that require maintenance of internal components can be fraught with extreme physical hazard, downtime and expense.

The plates – made of hundreds of kilos of steel and often weighted down further with accumulated debris buildup on top – are traditionally loosened by mechanics, who may have to crawl underneath giant machines to line up the bolt holes. Deaths and crush injuries may result.

Factors such as safety and time-efficiency have already helped to make the first sales in the US to global companies, which like it because it means they can safely do maintenance in the field, rather than having to take heavy equipment back to the workshop. Safety and avoidance of downtime are huge factors in the mining, energy and contracting industries, where thousands of heavy tracked vehicles are at work every day.

TEDs can travel across any terrain and can safely lift up to 800 kg. They have a 360o turntable at the top, which makes lining up ball joints safer, quicker and easier than the conventional methods using slings and chain block.

In addition to making belly plate removal safer, it also makes it significantly more efficient. Safety MITS collected customer data from major mining and contracting companies over a one year period and found that by using TED to remove and install belly plates they were able to reduce work time by 73.5%, while using one less mechanic.

With traditional belly plate removal techniques, there is a higher risk of crush injuries where a mechanic has to crawl under the vehicle to line up the bolt holes. These vehicles are often large dozers, weighing tens of thousands of kilograms, with heavy belly plates that are also prone to accumulating debris over the course of their normal operations, which increases their weight further and obscures the critical components that secure them in position.

The belly plate can be locked, secured or restrained, but the biggest safety concern is still having the mechanic placed directly underneath the dozer, or heavy vehicle. If the plate is not appropriately restrained or supported, uncontrolled movement can occur when loosening nuts or bolts, which poses a huge safety risk if a mechanic is working directly underneath 500 kg of steel.

If a dozer needs servicing while still in the field, other problems can occur, such as poor lighting, poor ventilation or inadequate space. These create significant hazards for a mechanic who needs to be positioned underneath the dozer to carry out maintenance. From a safety point of view – and to minimise downtime too – it is far better to remove these issues altogether with a multi-purpose machine such as the TED, which has been proven on some of the world’s busiest worksites.

TED is designed and manufactured in Australia and is built to withstand the harsh environments that heavy equipment works in every day around the globe. It is built with total compliance to Australian and New Zealand mining standards (ASNZ 4240), which are respected globally in ensuring the highest levels of safety are achieved. TED comes with a range of attachments, which can be easily installed and removed at a moment’s notice. These include:

The cradle conveniently bolts to the turntable on top of TED allowing it to rotate 360°.

About the author: Timothy Lightfoot is Directory of Product Development at Safety MITS Pty Ltd.

Read the article online at: https://www.worldcoal.com/product-news/05032015/safety-mits-supplies-first-tracked-elevating-device-to-us-2012/