Wind, natural gas and solar made up almost all new electricity capacity in the US in 2015 with 41%, 30$ and 26% of total additions, respectively, according to the US Energy Information Administration (EIA). In contrast, “there was virtually no coal-fired generation installed last year”, April Lee an Electricity Analyst at the EIA told World Coal. 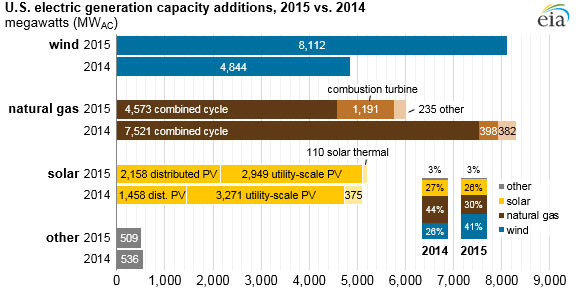 Over 8 GW of wind capacity was added in 2015, up from less than 1 GW in 2013. Texas – better known for its oil and gas industry – added the most, accounting for 41% of the total, followed by Oklahoma and three Midwestern states: Kansas, Iowa and North Dakota.

Natural gas installations fell away slightly in 2015 but still accounted for around 6 GW of new capacity. New plants in New Jersey and Texas making up half of the capacity additions. The US has seen a significant increase in gas-fired power over the last few years as a glut of natural gas born of the shale gas boom has seen prices plummet.

According to the EIA, natural gas will take the largest share of the US energy mix in 2016 – overtaking coal for the first time on an annual basis.

Overall around 5 GW of solar capacity was added in the US split between distributed PV (2.2 GW) and industrial-scale PC (3 GW).

On a state-by-state basis, Texas installed the most new capacity in 2015, adding about 5 GW split between wind and natural gas with some solar. California came in second with around 2.5 GW (mostly solar with some wind) and New Jersey was third with just over 1.6 GW (mostly natural gas).

Turning to coal and the picture was pretty bleak. According to the EIA’s Lee, just one additional 2.2 MW generator was added at the existing RED-Rochester industrial CHP plant in New York. This compares to 13.7 GW of coal plant retirements – of over 80% of the total retired capacity.