According to the US Energy Information Administration, trends in carbon dioxide (CO2) emissions from electricity generation through 2040 depend significantly on whether or not the Clean Power Plan (CPP) rule issued last August by the US Environmental Protection Agency (EPA) is implemented. 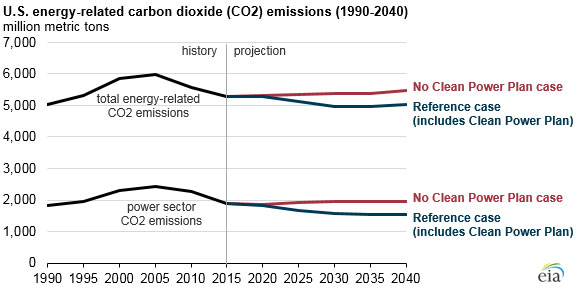 Analysis in the EIA's Annual Energy Outlook 2016 (AEO2016) examines what the CPP could mean for the fuels used to generate electricity, especially coal. The EIA recently released an annotated summary of two AEO2016 cases. The reference case assumes implementation of EPA's final CPP rule, while the No CPP case assumes the rule, enforcement of which is currently on hold pending judicial review, does not ever come into effect. 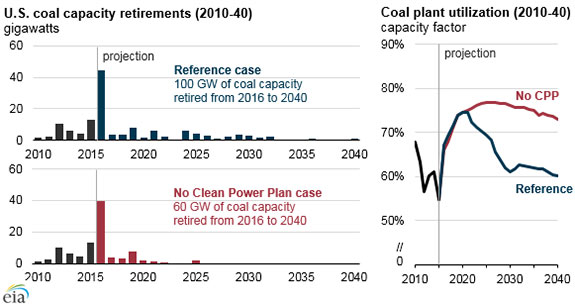 The reference case assumes the CPP is implemented using the mass-based option (controlling the amount of CO2 emissions) rather than the rate-based option (limiting the rate of CO2 emissions per unit of electricity). The mass-based standards are modelled using allowances, with cooperation across states at the regional level and all allowance revenues rebated to ratepayers.

Other CPP-related scenarios to be released over the coming weeks will examine different implementation alternatives. Some results, such as electricity prices and the mix of fuels used to generate electricity, are likely to depend significantly on compliance strategies.

In the reference case, reductions in CO2 emissions to comply with the CPP are primarily achieved by switching from carbon-intensive fuels, especially coal, to less carbon-intensive natural gas and to zero-carbon renewable technologies, such as solar and wind. Energy efficiency in the residential, commercial, and industrial end-use sectors and in the power sector also contributes to lower fuel use and emissions as end-use equipment becomes more efficient and as the use of relatively energy-efficient generators increases.

In the near-term, significant coal retirements are expected regardless of CPP implementation. Coal plant retirements have been relatively high in recent years – nearly 14 GW in 2015 – because of an increase in competition from units burning low-priced natural gas and the implementation of environmental regulations. About three times the amount of coal retirements in 2015 are expected to occur in 2016 – 40 GW to 45 GW – as the final deadline for the EPA's Mercury and Air Toxics Standards (MATS) occurred in April of this year. After 2016, another 55 GW of coal plants retire by 2040 in the reference case as the CPP is adopted. Even in the No CPP case, about 20 GW of coal-fired capacity retires from 2017 through 2040.

In the reference case, the remaining coal-fired generation capacity is also used less intensively over time as it is displaced by natural gas-fired and renewable-sourced generators. As a result of both coal unit retirements and lower utilisation of the capacity that remains, coal consumption in the electric power sector declines by 34% from 2015 to 2040 in the reference case.