Coal stockpiles at electric generating facilities totaled 197 million short t at the end of 2015, the highest level since June 2012 and the highest year-end inventories in at least 25 yr. More than 40 million short t of coal were added to stockpiles at electric generating facilities from September through December, the largest build during that timespan in at least 15 yr. In addition to relatively low overall electricity generation, largely attributable to the warmest winter on record, coal-fired electricity has recently been losing market share to electricity produced using natural gas and renewable resources. 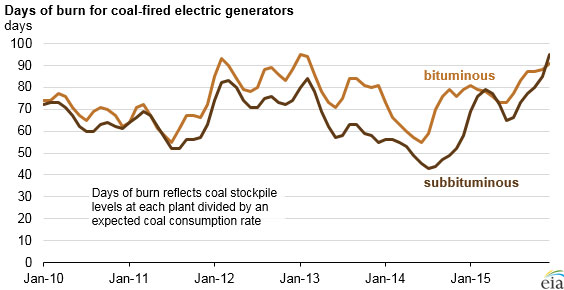 Relatively high coal stockpile levels at the end of 2015 come despite a reduction in coal-fired generation capacity. From 2010 to 2015, total U. coal generating capacity declined 10%, falling by nearly 33 GW to 285 GW. One way of measuring coal stockpiles, while accounting for the overall change in generating capacity, is to calculate days of burn. This calculation considers the current stockpile level at each generator and its estimated consumption (burn) rates in coming months, based on the average consumption rates for those months over the past three years. This measure approximates how many days the generator could run at historical levels before depleting its existing stockpile.