The global energy industry downturn at the hands of COVID-19 has not only hurt immediate revenues, but is also affecting national infrastructure and energy policy planning. A Rystad Energy analysis shows that gas resources around the world will see development delays, with the construction of planned regasification facilities also at risk. Coal may benefit as a result. 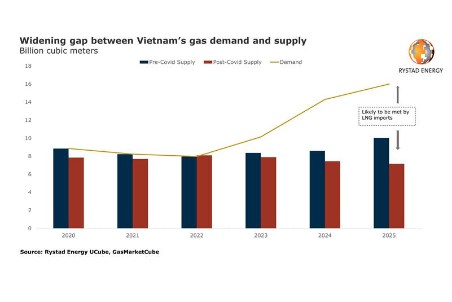 The case of Vietnam is a good example of how a country with its own rich gas resources will fail to meet domestic production expectations, requiring an increase in liquefied natural gas (LNG) imports instead. Planned regasification facilities also risk delays due to the downturn, leaving the use of coal as the only financially viable option to meet growing power demand.

Vietnam’s strong GDP growth – about 6 - 7% per year – demands a growing amount of energy resources. With a hunger to satisfy the country’s stable growth, Vietnam expects its power generation capacity will reach 125 to 130 GW by 2030 from the current 54 GW of capacity. In 2019, 33% of the country’s power mix was met with gas and the rest was fuelled by renewables and coal.

Even if non-gas sources meet their respective targets, there will still be significant gas demand as gas-fired power generation capacity is expected to grow from 7.2 GW at present, to 15 GW by 2025 and 19 GW by 2030.

Before the Covid-19 pandemic, Rystad Energy had forecasted that Vietnam’s domestic gas output would reach 10 billion m3 by 2025. Of this, around 60% of total gas produced was expected to come from new developments. Our updated outlook shows a much different picture, with the pandemic crisis and low oil prices postponing more than 200 billion m3 of Vietnam’s undeveloped natural gas resources.

Of the 180 billion m3 of gas resources discovered in the last 10 years only the Sao Vang and Dai Nguyet fields have approved field development plans, as the FID process has proven a long and arduous road. In the past decade only 11% of projects have been able to secure funding and the right to proceed with drilling and the development of new resources.

As a result, Vietnam will only produce 7 billion m3 of gas in 2025, rather than the expected 10 billion m3, creating a 9 billion m3 gap between domestic production and the 16 billion m3 of expected domestic demand. Vietnam’s goal to produce 80% of power generation with gas in the next 15 years now seems even less likely. In order to avoid reverting back to heavy coal imports, Vietnam will likely begin increasing its LNG imports as early as 2022. Even so, importing sufficient LNG volumes will be difficult.

There are currently four LNG terminals in the project pipeline – Thi Vai LNG, Son My LNG, Tien Giang LNG Projects, and South West LNG – which together will have a combined capacity of 10 million tonnes per annum by 2025. However, the terminals, which are being constructed primarily in southern Vietnam, will only reach 1 million tpy import capacity by 2023 with the start-up of Phase 1 of the Thi Vai terminal. This will only marginally fulfill the demand-supply gap.

Given this, any delays in the other planned regasification projects will put Vietnam’s goal at risk, a potential outcome which seems realistic in today’s volatile market conditions.

Read the article online at: https://www.worldcoal.com/power/24062020/rystad-energy-the-case-of-coal-in-vietnam/