The company has put its faith in coal-fired power generation in recent years, as it purchased Victoria’s Loy Yang A coal-fired power plant in 2012 and has now agreed to pay the New South Wales (NSW) government AU$ 1.5 billion for the largest power company in the Australian electricity market: Macquarie Generation.

AGL noted, however, that there could prove little value in the Liddell power plant, which is tied very much to the future of the Rio Tinto, Hydro and CSR-owned Tomago aluminium smelter. According to the Newcastle Herald, AGL flagged the potential closure of the smelter, due to a sustained downturn in the industry.

In a statement to the stock exchange that coincided with its annual results, AGL said it had bought Macquarie Generation on the assumption that Tomago Aluminium would close in 2017, meaning the Liddell power plant would no longer be needed to produce electricity.

AGL CEO, Michael Fraser, said that the closure of Tomago Aluminium “was only an assumption.” However, he explained that “to be conservative in how we valued the asset and negotiated the price, we just assumed that it [Tomago] would close.”

Even with the assumed closure of Liddell, however, AGL and Fraser both see value in coal-fired power.

Fraser said that delays to the start-up of Queensland’s gas export projects had pushed down the price of gas in the domestic spot market, and also resulted in Queensland generators exporting electricity to NSW.

Yet Fraser was confident this trend would reverse as the Queensland gas projects start-up, as they will absorb much of the surplus electricity currently being generated in Queensland.

"Delays in the LNG projects is causing that glut in gas, and we expect improvement in wholesale power prices" to follow the start-up of those projects, he said.

According to the Sydney Morning Herald, Queensland currently exports around 100 MW/day to NSW. This is expected to soon end, and instead NSW will commence exporting 300 MW/day to Queensland.

According to Reuters, Australian energy retailers are diversifying as consumers use less energy to avoid paying increasingly high power bills.

AGL said that its purchase of Macquarie Generation will almost double its generation capacity and give the company exposure to more of the Australian market.

Read the article online at: https://www.worldcoal.com/power/20082014/agl-places-faith-in-coal-fired-power-plants-1231/ 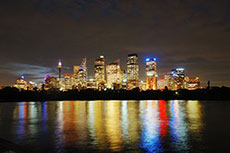