While consumer households could be spared a rise in energy bills, the carbon price floor (CPF) freeze introduced by UK chancellor, George Osborne, could prove to be a double-edged sword for those in the coal industry.

The freeze on the CPF announced in Osborne’s Budget could force coal plant operators to postpone plans to invest in clean technologies.

That’s the view of energy data specialist EnAppSys, which said the move would both help and hinder the coal industry.

The tax, which sets a floor for the price of burning carbon, was introduced in April 2013 with the aim of encouraging new energy-efficient power plants. The move triggered a wave of criticism from heavy manufacturers, such as steelmakers and coal plant operators, who claimed it made their business uncompetitive.

The CPF is designed to penalise companies who create pollution, and to encourage investment in green energy.

Osborne appeared to move to appease critics of the scheme by announcing that the CPF would be frozen at £18/t from 2016 – 17 until the end of the decade. Under original proposals, the CPF would have increased to almost £30/t by 2020.

The freeze is part of a £7 billion package of measures designed to cut energy bills for high energy-using manufacturers and encourage them to invest in schemes in Britain. But EnAppSys said it would even unnerve operators of existing coal plants, despite reducing their costs in the short term.

Paul Verrill, Director of EnAppSys, said: “In the long term, there is still a great deal of uncertainty. Some coal operators could now decide to sweat existing assets and postpone investment in cleaner processes, especially with the EU Industrial Emissions Directive in place. Those stations moving to biomass will have their plans thrown into further confusion.”

“The uncertainty is worse than rising costs,” Verrill continued. “Companies, especially energy intensive users, could now choose to base their projects in countries where there is a clear trajectory of increasing power costs but, crucially, a firmer regulatory and political environment for making investment decisions.”

EnAppSys said the CPF freeze would trigger fresh confusion over the direction of Britain’s energy policies and force companies to increase the risk premium on investments in power projects in the UK. Crucially, it could also encourage them to consider switching to invest in energy schemes overseas.

Verrill said: “It will make companies extremely nervous about future policy changes, especially with the general election looming next year. It could force people to invest in countries where there is more clarity and certainty on policy.”

“Effectively, the freeze will increase the cost of energy investments in the UK precisely at a time when the country needs a firm pipeline of new flexible gas projects to meet the coming capacity crunch,” Verrill explained. “A rising carbon floor price would have made gas-fired generation more profitable at the expense of coal, but this situation will be reversed by the freeze.”

EnAppSys estimates that Britain will need between 10 GW and 20 GW of new capacity to meet demand as a result of falling capacity at aging coal and nuclear plants – and the CPF freeze is unlikely to improve this dire situation.

Although the freeze could make it financially viable for operators to keep older coal plants running in the UK, it is likely to reduce investment in new gas-fired generation, biomass schemes and clean coal technologies. The savings to consumers from a lower CPF could be offset by higher premiums in the soon to be implemented capacity mechanism.

If anything, the overall effect of the CPF freeze could be to increase the capacity shortfall and delay the investment needed for a low-carbon future.

Industry professionals have also criticised the vague nature of Osborne’s speech, noting that sparse detail was given on how the £7 billion figure was arrived at, or how compensation would be funded.

The fact that the CPF was only introduced last year, and was now seemingly being reneged upon, was also a concern for analysts, who claimed the move undermined the stability of the government’s policies.

Renewable Energy Systems (RES), which claims to be the UK’s largest independent renewable energy developer, said freezing the CPF undermined the stability of the green investment case that had been promised by the government.

Lord Stern, author of the influential climate change report, said the chancellor should have resisted "temptation to fiddle", which had only increased uncertainty and reduced investor confidence.

Read the article online at: https://www.worldcoal.com/power/20032014/carbon_price_floor_freeze_criticised_636/ 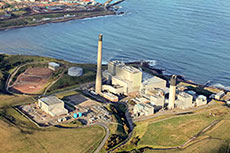 Shell has signed an agreement with the UK government to progress the Peterhead CCS project to the next design phase.