EnAppSys estimates that in the next ten years coal generation could fall as low as 8 GW and nuclear generation to 1.3 GW due to the closure of ageing power plants – a far cry from the combined 37.5 GW of current capacity. Tougher environmental laws and age are triggering the closure of these plants, as operators find it increasingly difficult to meet strict emissions targets, while decommissioning looms for the majority of nuclear plants in the next 10 years.

A freeze on the carbon floor price

Recent speculation that the UK Government will announce a freeze on the carbon floor price – essentially a charge on emissions – could encourage some operators to continue running their coal plants. However, this alone will not solve the impending capacity crisis.

Barring a significant build up of electricity storage projects in the UK, there must remain sufficient conventional capacity to provide power at times of system stress when levels of generation from renewable sources are low. Consequently, a significant upsurge in the number of conventional generating plants will be required in the next decade: according to EnAppSys, the UK will need between 10 and 20 GW of new capacity to meet demand with the consensus favouring gas-fired generation to plug the gap.

Paul Verrill, a director of EnAppSys, said: “Existing gas-fired plants could cover around half of the generation shortfall should combined coal and nuclear capacities fall as predicted. However, the remaining shortfall must be met by new power plants if the UK’s ageing coal plants continue to close. A carbon floor price freeze, if it happens, may slow the rate of coal plant closures but new capacity will still be required.”

“Whilst there is a general consensus for the need for significant new build, the UK wholesale energy market and political uncertainty mean new build capacity projects are currently in short supply,” Verrill continued.

Due to the Large Combustion Plant Directive, power plants in Europe have to meet certain sulphur and nitrous oxide emissions standards or agree to close by 2015 or after 20,000 hours of generation, whichever occurs soonest. A combination of this directive and the carbon floor price has already resulted in the loss of 9.6 GW of generating capacity in 2012 and 2013, with a further loss of 3.9 GW expected by 2015.

By 2024 a second piece of legislation, the Industrial Emissions Directive (IED), will have further reduced the number of ageing coal-fired plants propping up the British electricity markets. Recent announcements by four of the six major utilities, SSE, EDF and RWE, further indicate that capacity reduction due to the IED will start long before 2024.

In addition, the decommissioning of ageing nuclear plants will further reduce Britain’s power-generating capability. The country’s nuclear fleet will consist of just one power plant from 2024, Sizewell B, with that remaining station due to decommission in 2035. While, it is hoped that Hinkley Point C and Sizewell C will have come online by then, providing a combined 6.4 GW of extra capacity, this is far from certain.

All of this points to an increased need for new generation capacity and the climate to make this happen sooner rather than later.

Read the article online at: https://www.worldcoal.com/power/13022014/uk_capacity_crunch_approaches_coal509/ 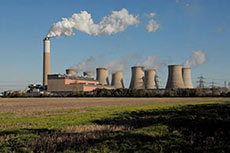 EDF Energy may close two coal-fired power plants in Britain by the end of 2023.