According to a new report from the US Energy Information Administration (EIA), so far this winter, natural gas consumption in the electric power sector (gas burn) has been higher than in any previous winter. According to Bentek Energy, gas burn in the electric power sector has averaged 25.0 billion ft3/day so far this winter (1 November through 8 February), up 17% from last year's average of 21.4 ft3/day during the same period and significantly higher than the 18.8 ft3/day average of the past five years. Low natural gas prices have been the primary driver of increasing natural gas use for power generation, although reductions in coal capacity and the availability of efficient gas-fired generating units have also played a role. 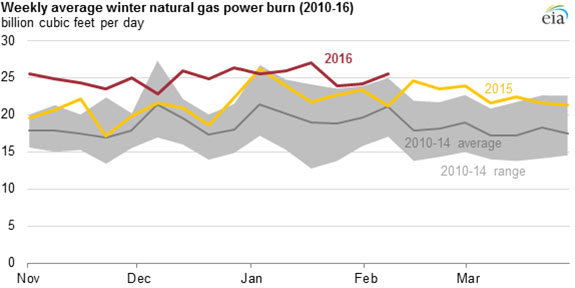 In addition to lower natural gas prices, improvements in the efficiency of new natural gas plants are helping to increase the economic attractiveness of dispatching gas-fired generation. In 2015, about 40% – 6200 MW – of all new utility-scale plants of 1 MW or greater were natural gas-fired plants. Another factor in the increasing gas burn is the growing number of coal plant retirements. Preliminary reports indicate that nearly 15 000 MW of coal-fired capacity was retired during 2015. 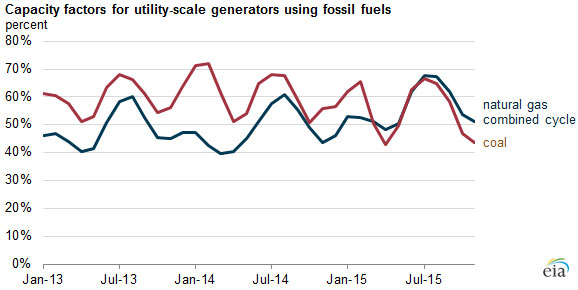 Gas burn has increased in almost all regions in the US this winter, but the reasons for the increase vary regionally. The Pacific Northwest region had the largest percentage increase in natural gas burn because of lower-than-normal hydro generation in 2015. The Southeast and Northeast regions use the most natural gas on a regional basis, and their gas burn has increased by 17% and 15%, respectively, thus far this winter compared with the same period last winter. In the Southeast, both declining utilisation rates for coal plants and continuing coal plant retirements drove the increase in natural gas burn. States in the South Census Region alone accounted for more than half of total coal retirements in 2015. In the Marcellus region of the Northeast, natural gas has consistently been priced below gas at the Henry Hub, making it even more economic in that region. Additionally, infrastructure additions have made it easier to move natural gas to users.

Read the article online at: https://www.worldcoal.com/power/11022016/natural-gas-use-for-power-generation-higher-this-winter-213/