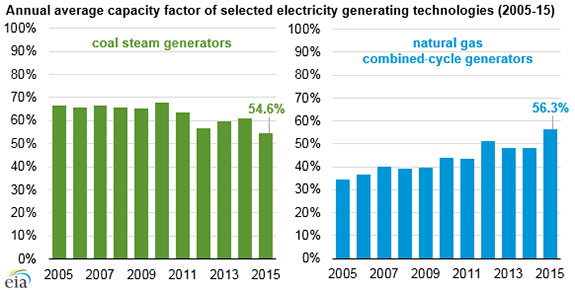 The mix of energy sources used in US electricity generation has changed dramatically over the past few years. This change is particularly evident in the shift from the use of coal to natural gas for power generation. The industry has been building new natural gas capacity and retiring coal plants, but another important factor behind the changing generation mix is the day-to-day pattern of how existing power plants are used.

Coal power plants primarily rely on steam-driven generating units. In contrast, power plants fuelled by natural gas rely on a variety of technologies. Natural gas-fired generating units driven by combustion turbines or steam turbines accounted for about 28% and 17%, respectively, of total natural gas-fired capacity in 2015. Combined-cycle plants, which are designed as an efficient hybrid of the other two technologies, accounted for 53% of gas-fired generation capacity and tend to be used more often than the other types of natural gas generators, as measured by capacity factors.

Capacity factors describe how intensively a particular generating unit or a fleet of generators is run. For instance, a capacity factor near 100% means that the unit is operating almost all the time at a rate close to its maximum possible output.

Coal steam power plants require more energy input per megawatt-hour of generation than natural gas-fired combined-cycle plants. Yet, the low cost of coal relative to natural gas until recent years favoured the use of coal-fired generating units to fulfill baseload electricity demand, leading plant operators to run these units at rates close to their output capacity during peak demand hours. During off-peak hours, such as overnight, coal plants generally continued to operate. But, in areas with large amounts of available coal or nuclear generation capacity, many coal plants would run at rates closer to their minimum operable capacity. 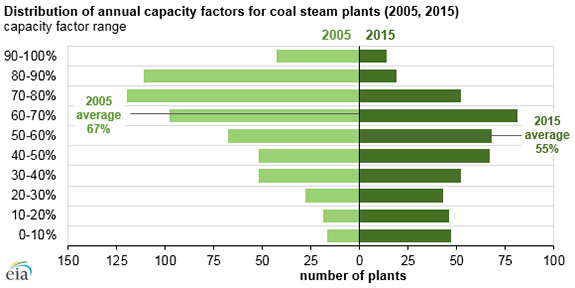