Vietnam is on the brink of a significant transformation to its generation mix and the country moved from an agrarian to an industrial economy, according to data from the US Energy Information Administration (EIA). As part of this, the southeast Asian country will rapidly increased its total generation capacity with substantial coal-fired capacity additions and the first nuclear power plants in the region. 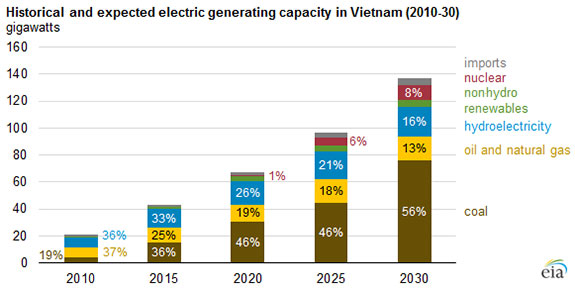 “Recently, Vietnam’s rapid economic growth, industrialization and export market expansion have been accompanied by domestic energy consumption,” the EIA said in the Today in Energy briefing on 3 August. According to the country’s General Statistics Office, electricity demand will grow at annual growth rates of 10 – 12% to reash 615.2 TWh by 2030.

Last year, coal consumption totaled 19.1 million short t – a 21% increase on 2013. Use of the fuel has continued to grow through this year, according to the EIA, as unseasonably hot weather has hit hydro capacity. Vietnam is still in the process of developing its coal-mining industry and is reliant on higher-cost imports with PetroVietnam seeking to buy 11 million short t[a from 2017 to supply the country’s power industry.

Read the article online at: https://www.worldcoal.com/power/04082015/vietnam-to-boost-domestic-coal-fired-power-generation-2676/