At the invitation of the Ministry of Energy and the Management Board of Jastrzebska Spólka Weglowa, Ambassador of Armenia to Poland Samvel Mkrtchian, paid a visit to Pawlowice. It was the first opportunity for the diplomat to see a coal mine from the inside. 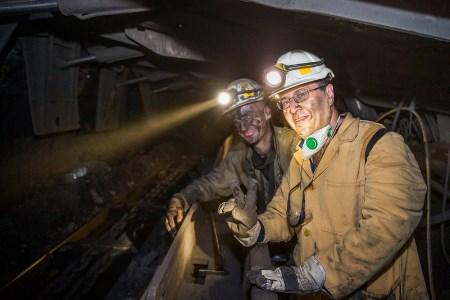 “I am awestruck by the hard work of miners that I have seen. I have met some strong men and the extreme conditions of they work. Before my visit, I had no idea what such a mine looks like, so it was a very interesting experience for me, incomparable to anything else,” said Mkrtchian. “To understand Poland and Poles, I should get to know the mining industry, because it is an important element of the country’s economy.”

The Armenian diplomat visited level 830 m in the Pniówek mine. Accompanied by Piotr Grabonia, Chief Underground Occupational Safety and Health Engineer, he was familiarised with the coal mining process. The ambassador was extremely impressed by the technological solutions applied in the mine.

The Head of Armenia’s Diplomatic Mission has been working in Poland since December of last year, although he visited Poland for the first time back in 2001.

“I have spent only seven months in Poland, but I already feel at home here. I like nature, especially forests and greenery, which is so abundant here,” said the Ambassador, who paid particular attention to the rapid economic growth of the country.

To commemorate his visit to the region, Mkrtchian received a photographic album of Poland, a figurine of Saint Barbara and a symbolic foreman’s pickax – a supervisor’s attribute.

Read the article online at: https://www.worldcoal.com/mining/31072019/armenian-ambassador-visits-jsws-pniwek-mine-site/