RecyCoal focuses around the recovery of waste coal from active and abandoned mines and spoil heaps. The company is in the process of increasing production at Rossington Colliery.

As such, the company researched the market to source machines capable of achieving ‘environment-led’ coal recovery, including excavation of the tip material and replacement of processed discard to regenerate the original tip into a public amenity with increased access and many new wildlife habitats.

“We made a key decision to up production at the Rossington Colliery, resulting in the implementation of an extensive two-year project, designed to be lean, effective, and completed by the end of 2016,” explains Andy Foster, Mobile Plant Manager at RecyCoal. 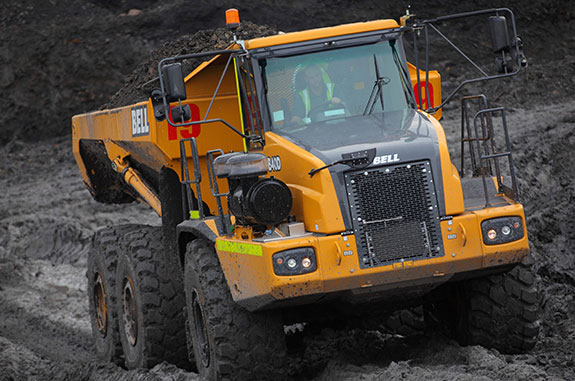 “To best achieve this, we decided existing machines needed to be replaced, but didn’t want to rush into an ill-considered decision so chose the initial step of conducting extensive preliminary fuel trials.”

“We compared the fuel efficiency of the Bell B40D with the others for a week. Our fuel trials were extensive, and went to show just how much leaner the Bell machine was; proving to be more economical per hour and per t, as well as less expensive to purchase in the first instance.”

Andy says his team has ‘a lot of muck to move’, so invested in 12 machines in total. The first six are already up and running, with the remainder soon to be delivered.

Speaking on behalf of Bell Equipment UK, Managing Director Nick Learoyd added: “The request for so many Bell machines as preference to those of a major manufacturer is commendation indeed for our vehicles; their design, efficiency and capabilities. We’re delighted with the order and are confident that the supplied equipment will completely fulfil RecyCoal’s extensive requirement.”