Aggreko was appointed by MMG Limited to deliver 20 MW of power to the Las Bambas mine situated more than 4000 meters above sea level in the Peruvian region of Apurimac.

The use of electric shovels was important to the first phase of the project. Such tools require significant power to operate. Due to construction delays with the transmission lines in the remote area, Aggreko was selected for the project as one of the only power rental companies capable of providing such a service to the area.

The first stage, which was delivered at the end of 2014, included 8.4 MW of power to run several electric shovels for mineral extraction. In the second stage, Aggreko delivered an additional 11.6 MW of power for overall site operations.

In addition to the first two phases of the project, Aggreko is responsible for commissioning, storing and filtering the fuel supply, allowing for 24-hour continuous operations of the mine. Following the project’s completion, Aggreko’s team will oversee all decommissioning needs.

Read the article online at: https://www.worldcoal.com/mining/27052015/aggreko-provide-power-lasbambas-mine-2333/ 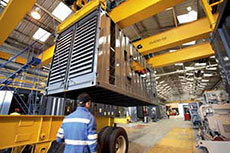 Aggreko has launched a remote monitoring system with a dedicated technical support team.