The Australian-based Grasstree longwall operation, which is part of the Capcoal complex in the Bowen Basin of central Queensland, has undergone a series of performance upgrades uplifting it back to delivering world leading longwall performance, resulting in more than 9 million t of coal cut in the preceding year of 2017. 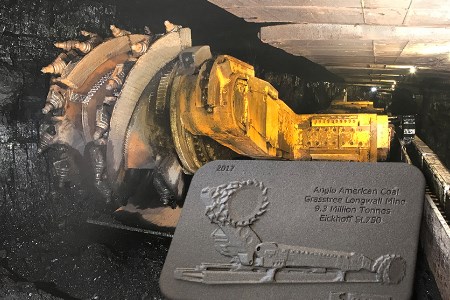 Here, since 2007 an Eickhoff SL 750 shearer loader is cutting its way through the 2.8 m seam at a panel width of 340 m. The high utilisation delivered by the shearer averages above 95% and state-based and automation operations enable highest performance while automation features keep staff out of harm’s way.

The hard coking coal produced in this operation is mainly used for export and steel manufacturing and transported by rail directly to vessels on the Dalrymple bay coal terminal.

Eickhoff´s SL 750 range is fully equipped with advanced automation features which enable coal producers to continually break world records on a monthly and annual basis. This machine has proven itself to be a reliable backbone in longwall operations worldwide and is also highly favoured by Australian mines.

Eickhoff’s own subsidiary Eickhoff Australia Pty Ltd. is the sales and distribution hub for machines, parts and service in Australia. A new workshop for shearer overhauls is under construction in New South Wales and further supporting existing stores and offices for service and parts supply close to the mines in all Australian coal fields. Currently Eickhoff Australia is preparing a new SL 750 shearer loader designated to go underground at Glencore´s Ulan No. 3 mine exchanging an older Eickhoff SL 500 shearer and by that delivering a leap in technology in regards to automation functionality, user friendliness and high production outcomes.

Since its foundation in 1864 Eickhoff has been specialised in underground coal mining equipment. Today, Eickhoff is a successful German based global supplier of longwall shearers and continuous miners, providing the world wide coal community with more than 50 machines every year.

Read the article online at: https://www.worldcoal.com/mining/27032018/grasstree-longwall-operation-undergoes-performance-updates/