Banks Mining has provided its staff with high-level health and safety and IT training. The training investment from the mining firm benefitted all the plant operators at its Rusha surface mine, near Breich in West Lothian.

All the Rusha employees completed a Level 2 NVQ that concentrated on health and safety awareness and was then followed up with a practical IT training course. Edutrain, an Edinburgh based education and training company, carried out the training.

Richard McClelland, Managing Director at Edutrain, said: “Feedback from Edutrain’s trainers from the Rusha site was extremely positive, when on site they could see clearly that Banks Group had a strong culture of health and safety.

Site manager for Banks Mining’s Rusha site, Ian Ritchie, said: “It is of great importance to us that the team that operates in the mine is fully confident, competent and capable of operating to the highest standards.

The company predicts that the Rusha site will directly contribute more than £5million to the local economy every year through wages and other supply chain contributions, and in addition to the people employed on site, it will also support a number of other off-site jobs in related transport and supplies activity.

Read the article online at: https://www.worldcoal.com/mining/26052015/rusha-surface-mine-workers-nvq-training-2325/ 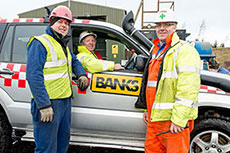 The Rusha coal mine, Scotland, is providing a £4 million/yr boost to local suppliers.

The Scottish government has released a consultation seeking views on the effective regulation of opencast mines.